I wrote this entry on March 31, but was unable to upload it due to internet connection issues in Death Valley. We are in Pahrump, Nevada now.  That seems like a long time ago. Much has happened in the past two days. I will write more about that soon, but first, I want to get this entry published.

When we left Yosemite NP on March 15, Brian and I spent much of the time driving back to our camp discussing our plan for our next visit. We decided that we would take the following day off and then return to Yosemite NP on March 17 and do a hike. Brian was set that he wanted to do the Yosemite Falls hike all the way to the top. That hike is only 7.2 miles, but gains 3700 feet in elevation. The good news is that it is an up and back, so I could always just stop and wait for Brian to return... or could I?

Brian is 20 years younger than I and is in much better shape. My problem (and it is purely my problem) I am way to competitive to quit even when it everything is telling me it is time to stop. That character flaw would bite me on this day.

We made the drive to the park. I got a decent shot of the rock you have to go under at the gate on this end of the park. 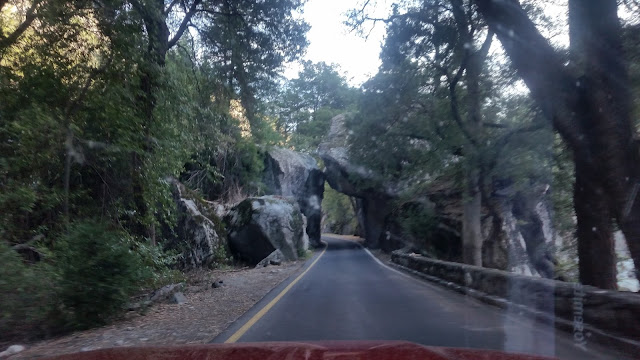 We were at the base ready to go about 10:00 AM. This trail was originally built in 1871 and has been in service since then. It is amazing to think how many other people have done this hike. The guide said 6 to 8 hours for this hike.That turned out to be just about right. The first part was dry and very steep. We read that there were about 70 switchbacks. It was all very steep and very rocky. 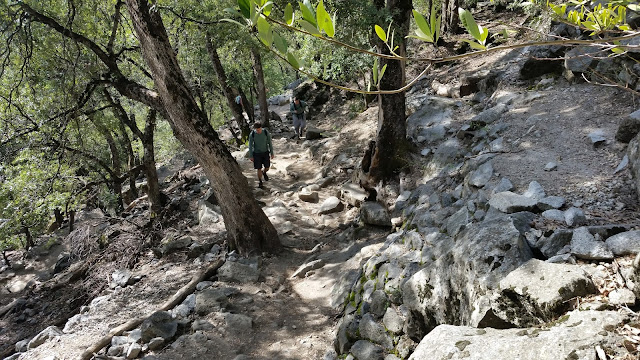 It was not long and we started getting some nice views of Yosemite Valley. You never get tired of those views. 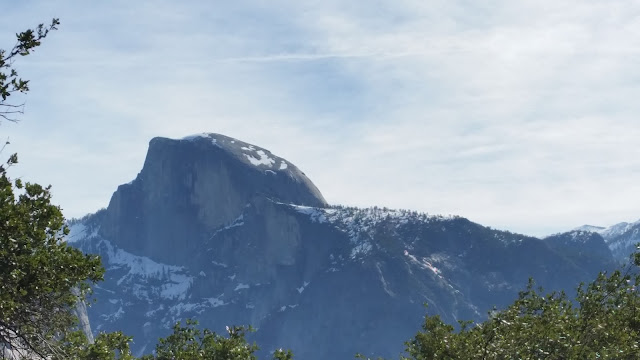 Half Dome in all of it's glory. 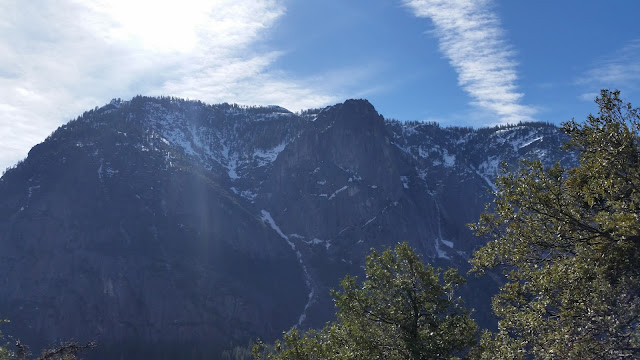 The wall above us was daunting: 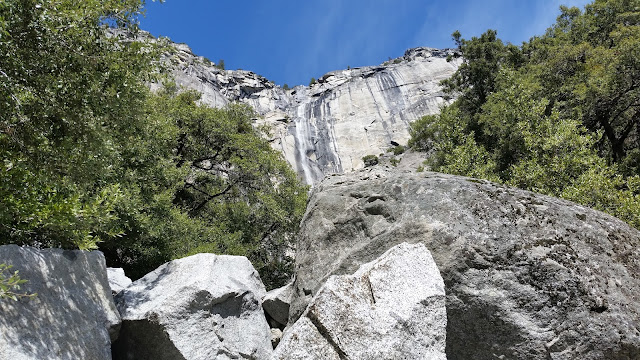 The snow on the far side of the valley was a sign that I missed. Would there be that much snow on this side also? 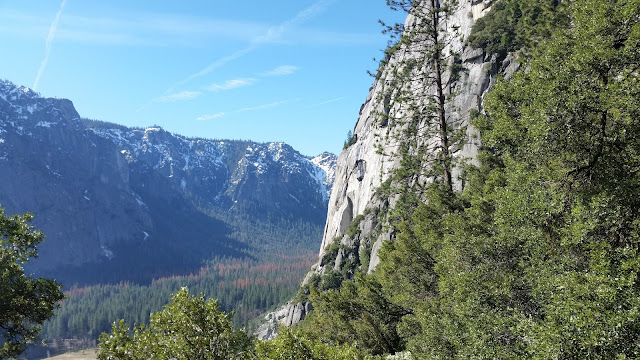 We hiked for a long time and when we stopped I was amazed that we had only gone a mile. We could see our progress measured in vertical feet looking out over the valley. This was going to be a long day. 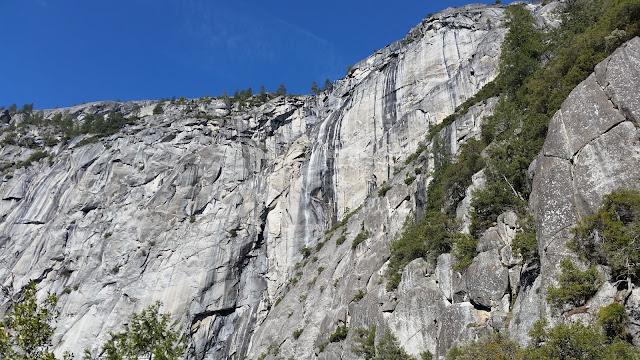 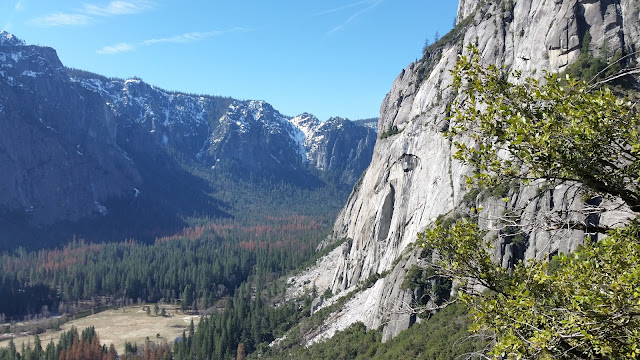 We made it to the overlook at just over a mile. This would have been plenty, but we soldiered on. Here is Brian looking fresh at this point. 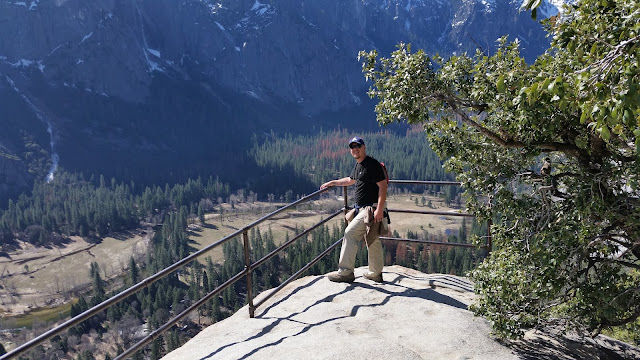 The views are amazing up and down the valley: 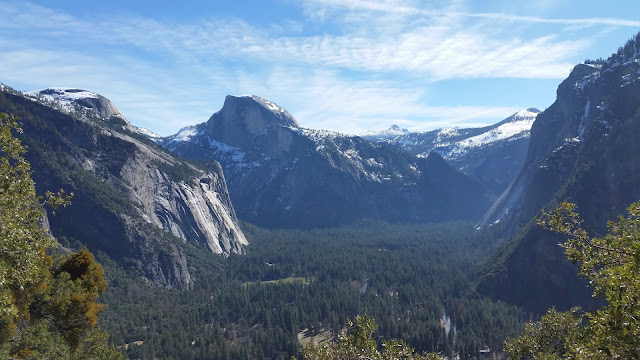 The hike then took a diabolical turn. You go down about 300 vertical feet and make a traverse to get near the base of the upper falls. It feels good at the time, but you know this will not be fun later in the day. This is the first time you get to see the falls. The views of the falls are beyond awesome. 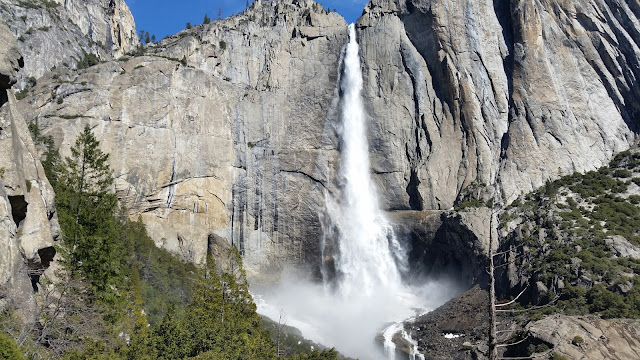 Just after the base of the falls we hit our first snow pack. 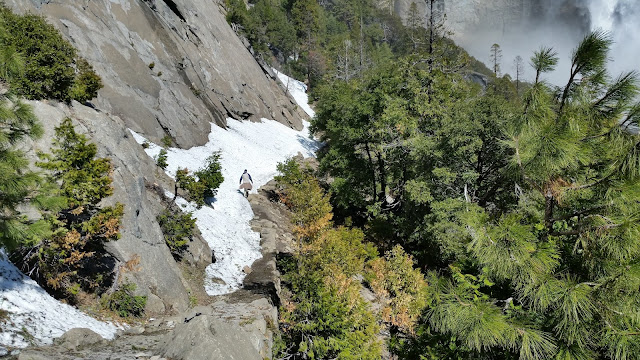 We crossed an ice bridge, it was half that thick later in the day. 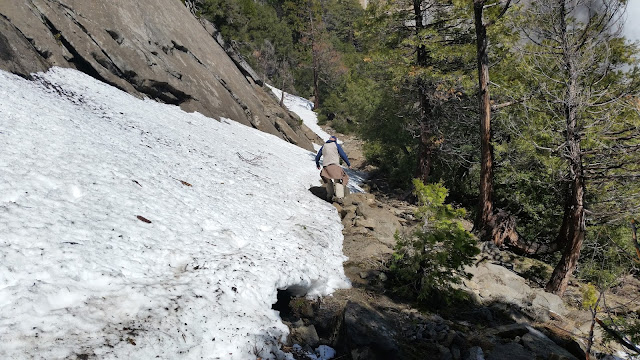 There was this ever present wall above us that reminded us how far we had to go. 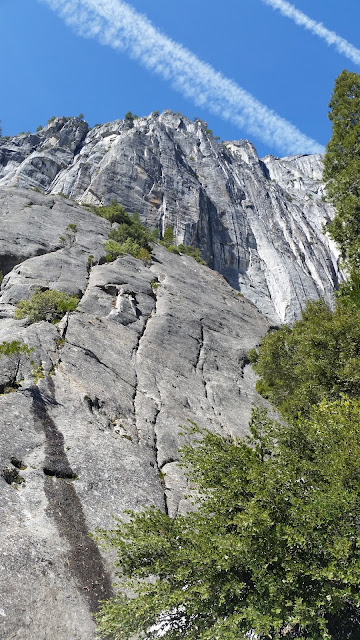 We were right along the waterfall when I got the perfect angle to get Half Dome and the water fall in the same frame. My favorite view of the day and why it is now the header on this blog. 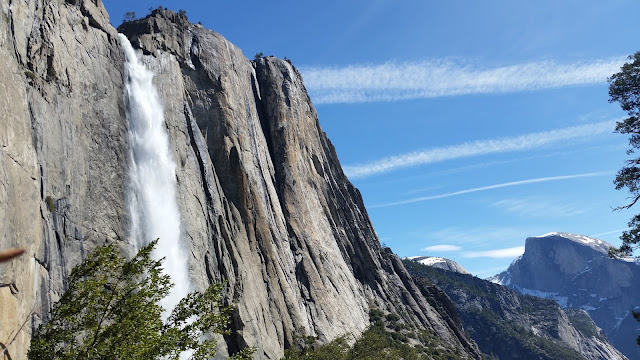 This shot shows you the angle we were climbing. There was hikers around us all day. Most of them college kids. Everyone would do a pitch or two and stop and try to catch our breath. 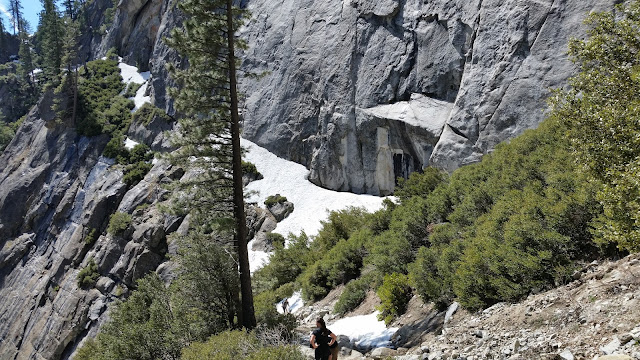 The snow then became constant. It was icy and slick. It really made it much more difficult. My quads were burning because I had to be careful not to slip and lose ground I had just made. 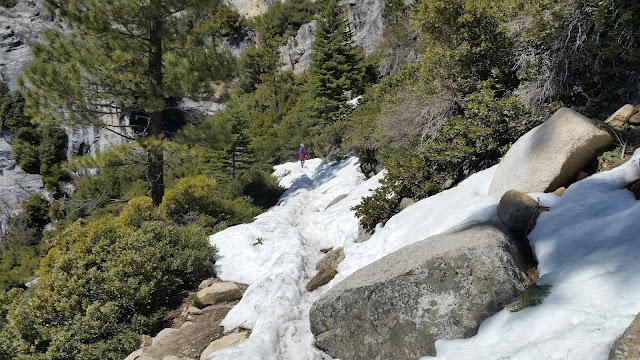 I didn't take many pictures in that last section. It was tough, but you could see the wall to the left getting shorter and blue sky up ahead. Here is the top. What a view! 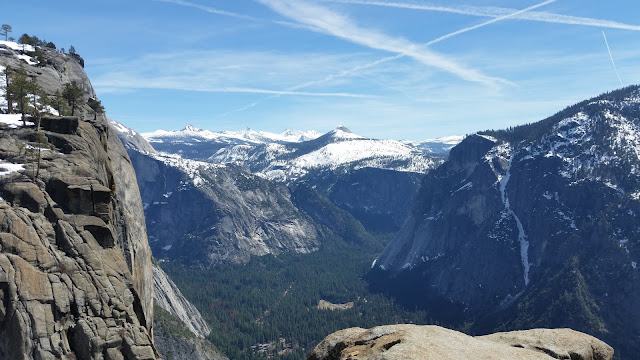 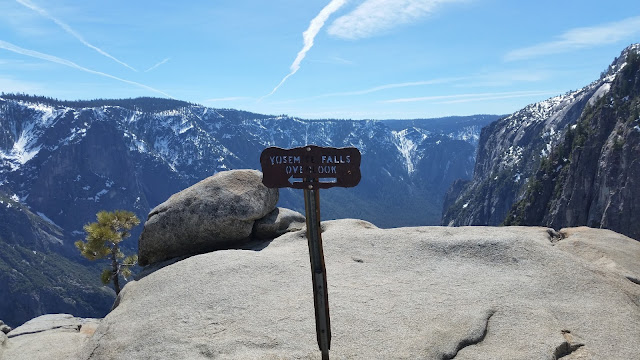 My legs were pretty tired, but there was no way I was going to quit before I reached the top. Now the problem was, I had to go back down. I ate a granola bar, some trail mix and some beef jerky.That gave me a shot of energy.

The trip back down through the snow was more difficult. You had to kind of slide/ski and try not to fall. I did take one fall and caught my bad leg underneath me. I may have gained a couple of degrees of ROM on that one. I do think I strained my calf, although I did not know it at the time.

Brian was ahead of me and waited for me at the base of the waterfall. He is a great SIL.

When I got to the falls the sun was hitting it just right, forming a rainbow. I sat and rested and enjoyed that place for a long time and ate the last of my food. 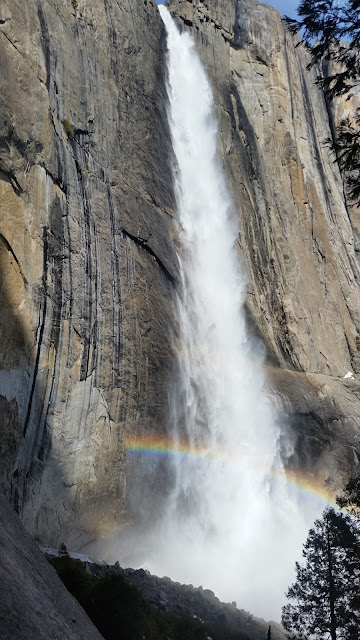 I then knew the uphill section was next. I struggled through and then only the 70 or so switchbacks to the bottom. I think they went on for ever. The trail was full of large rocks and it required you to hop from rock to rock. That was a lot to ask from my old legs.

Kim walked up the trail a ways and boy was I happy to see her. Brian and I celebrated with a high five when I reached the bottom. It was 5:30 PM. Brian had completed it about a half hour earlier. It is also possible that some beverages were enjoyed when we got back to camp.

I have to admit, I was sore for about a week in all of my legs and that is when I determined that my calf was more than sore. It took about 2 more weeks to return to normal.

I am so glad that Brian talked me into this hike. I still carry that feeling of accomplishment. It will help me understand better my capabilities and push me to do more.

Before I left the park I had to pay my respects to my favorite rock in the park. Here is a shot of El Capitan: 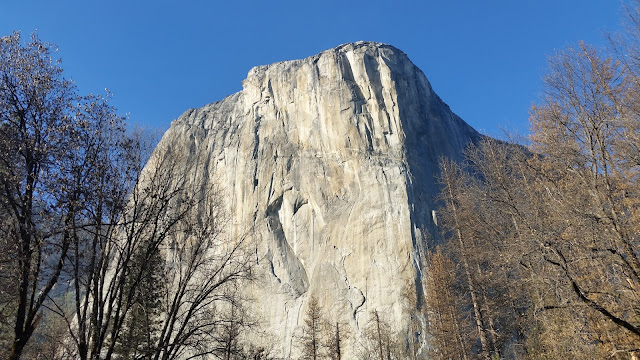 Early the next morning, Brian, Shannon and Amelia headed to the airport in San Francisco. I said good bye and then headed back to bed. The next few days were tough. We were blessed with awesome weather in both San Francisco and Yosemite for their visit. We paid for it after they left with some rain, hail and snow at camp. That was fine with me, I couldn't do much anyway.

Next up for us is moving south to see Sequoia and Kings Canyon in the winter. I will write about that in my next entry along with a little mishap or two.

Posted by ktmissouri at 4:43 PM