We were expecting to leave Mustang Island SP on Friday, February 6, but  the weather on the 5th was bad and I really wanted to make the ride to the south end of Padre Island with my new riding buddy, Jim from Iowa. We discussed the options and decided to ride on Friday. That is another great thing about  this lifestyle, no set plans.

I checked the tide tables and thought a 9:30 AM start should be good for a ride down the island. I mounted a 5 gallon gas can on the back rack of my KTM 450 and we took off. We stopped in town to fill both our bikes and I put about 4 gallons in the can. We rode down to the Padre Island National Seashore and onto the sand. We rode down to the 10 mile mark and refilled both bikes and hid the can in the dunes. We had 100 miles of riding on the beach in front of us before we got back to the gas. I was pretty sure I could make it, but I have never ridden in sand for that long and I was not sure what it might do to my MPG. 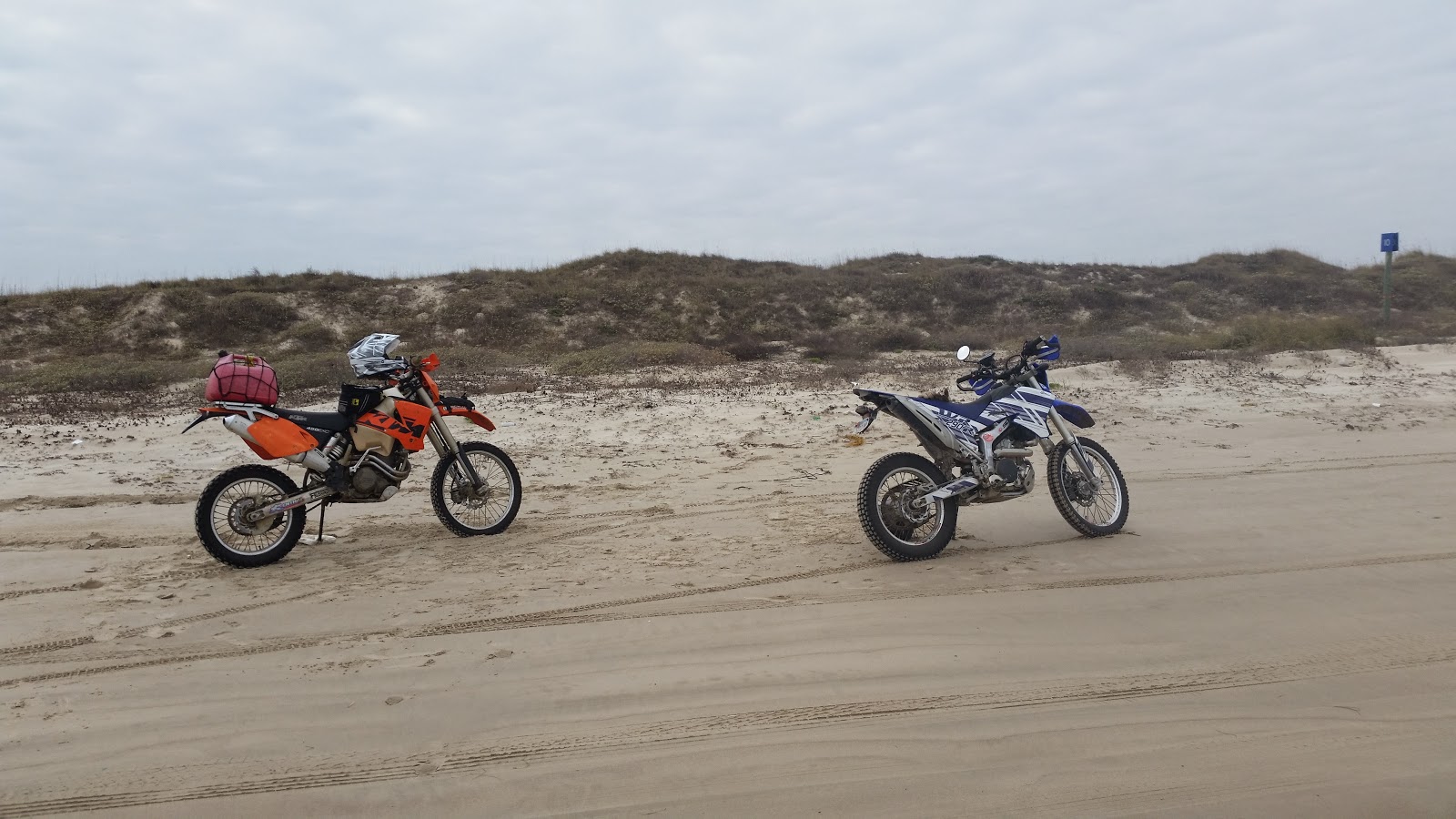 This is a very isolated area. There are two major currents that meet off shore. The result is lots of stuff gets washed up on the beach. Much of it is so large it would not make sense to remove it. We saw this large tank that has become a graffiti target. 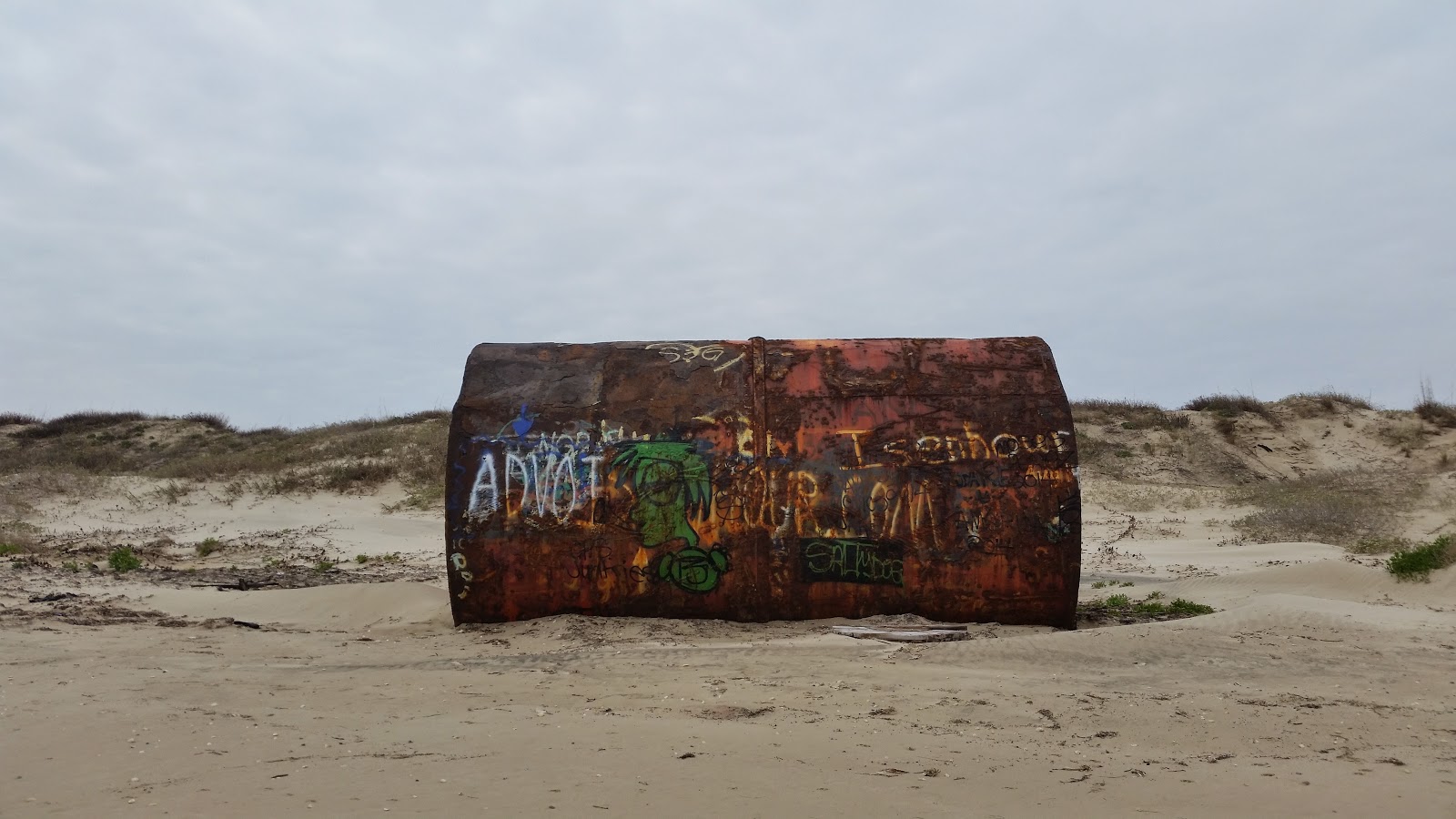 Much of the beach has very few shells. There are a few places where there are tons of shells. Here is what they call large shell beach. 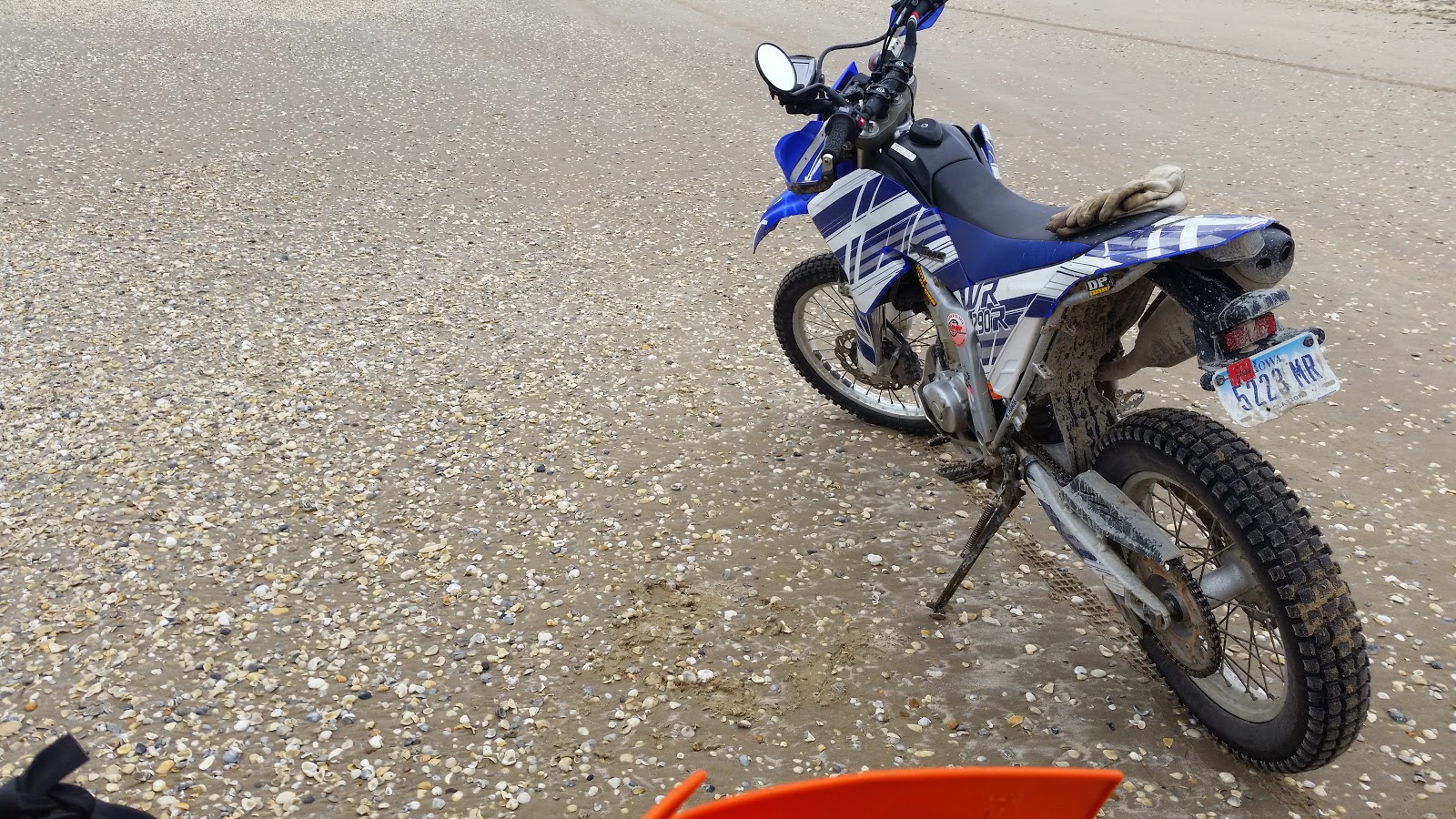 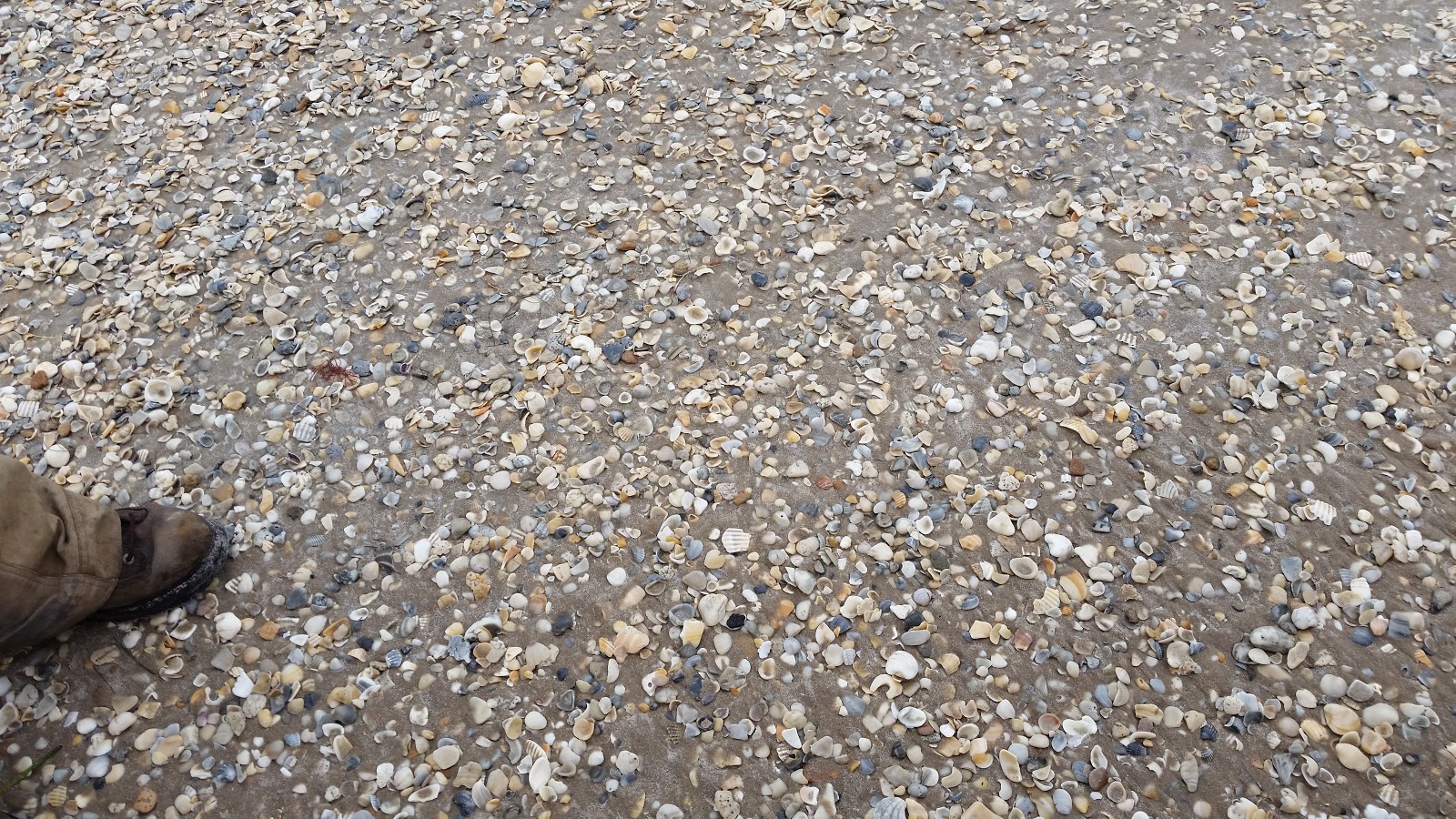 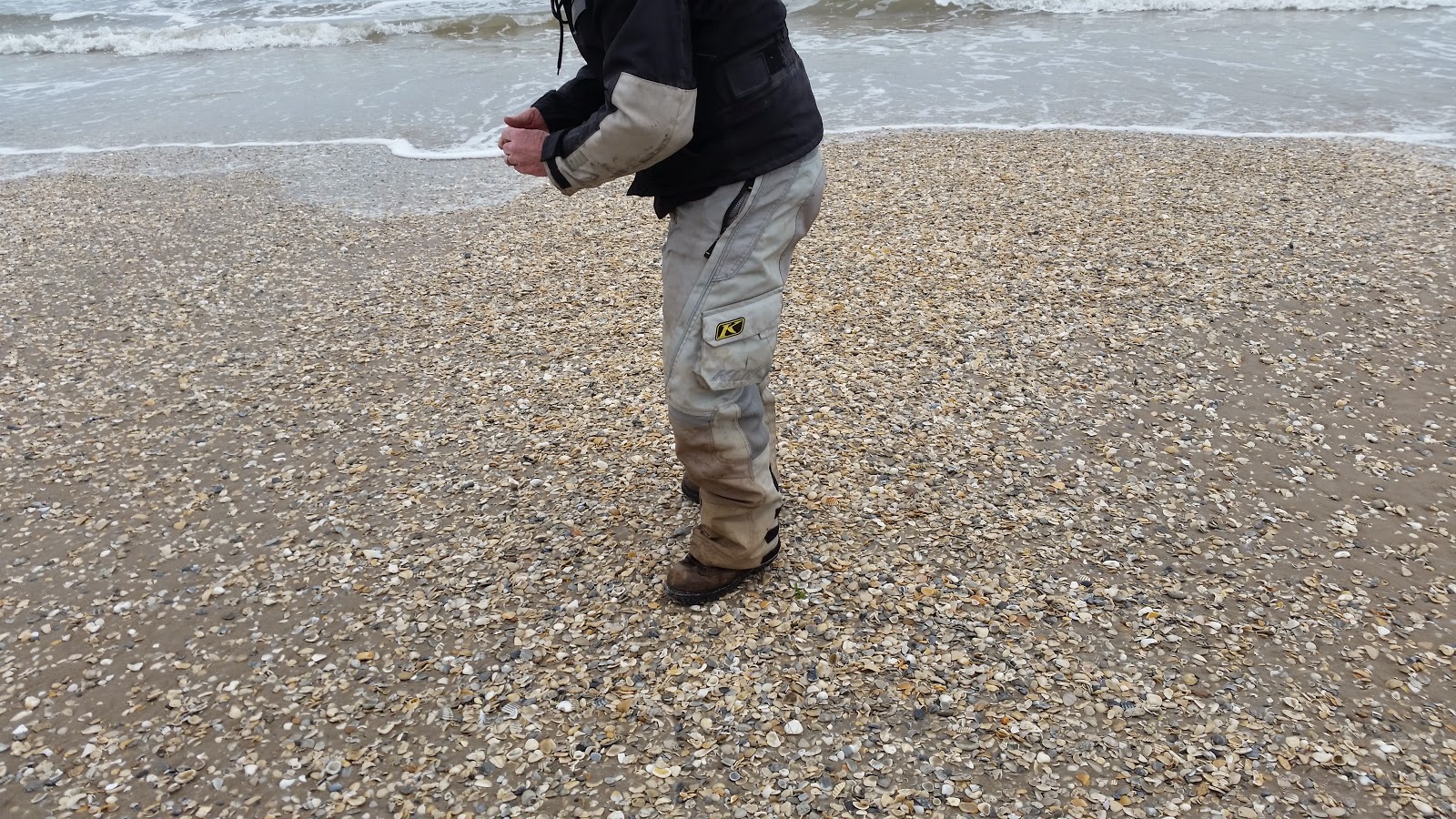 There are a few buoys that have washed ashore. 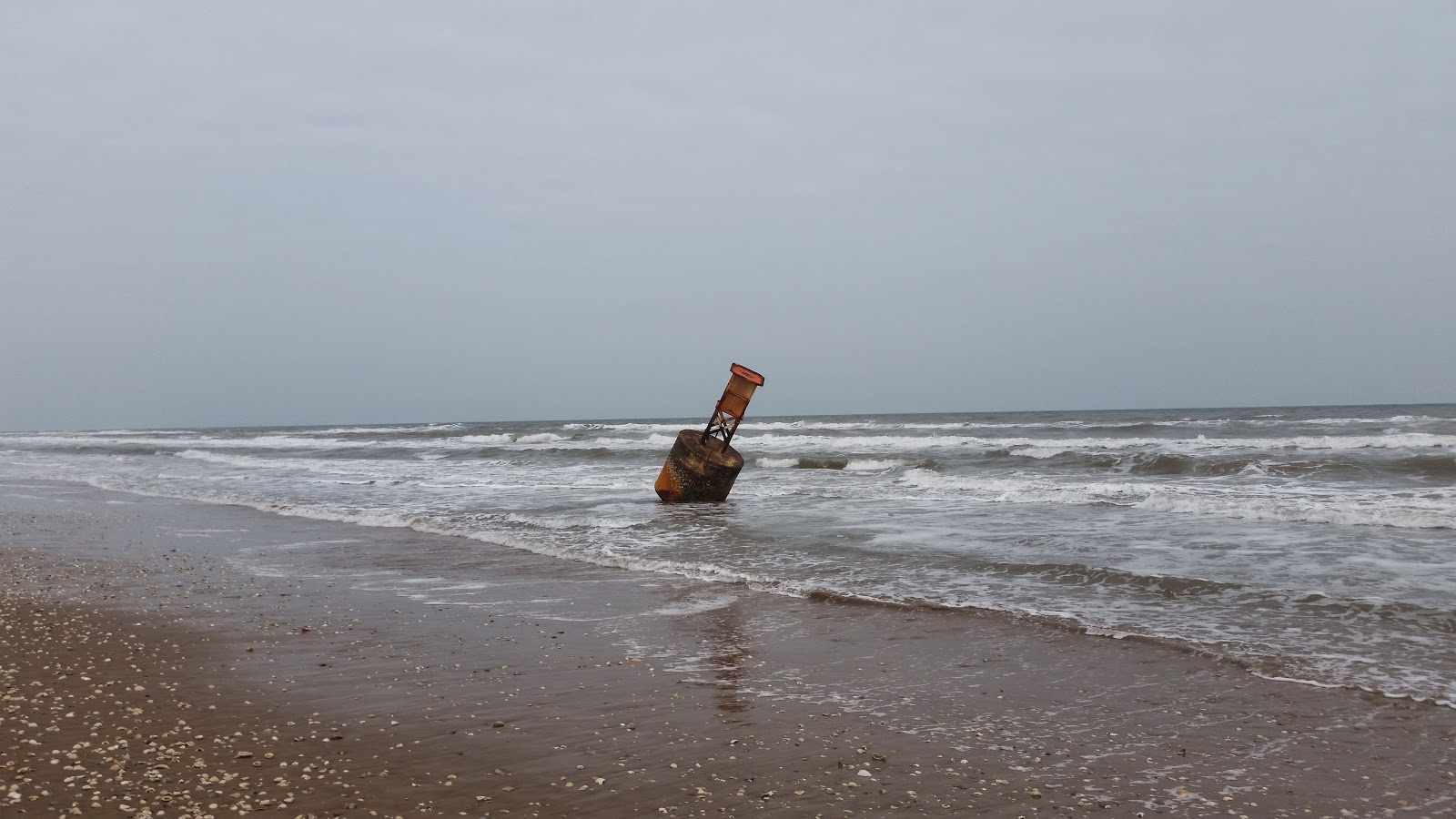 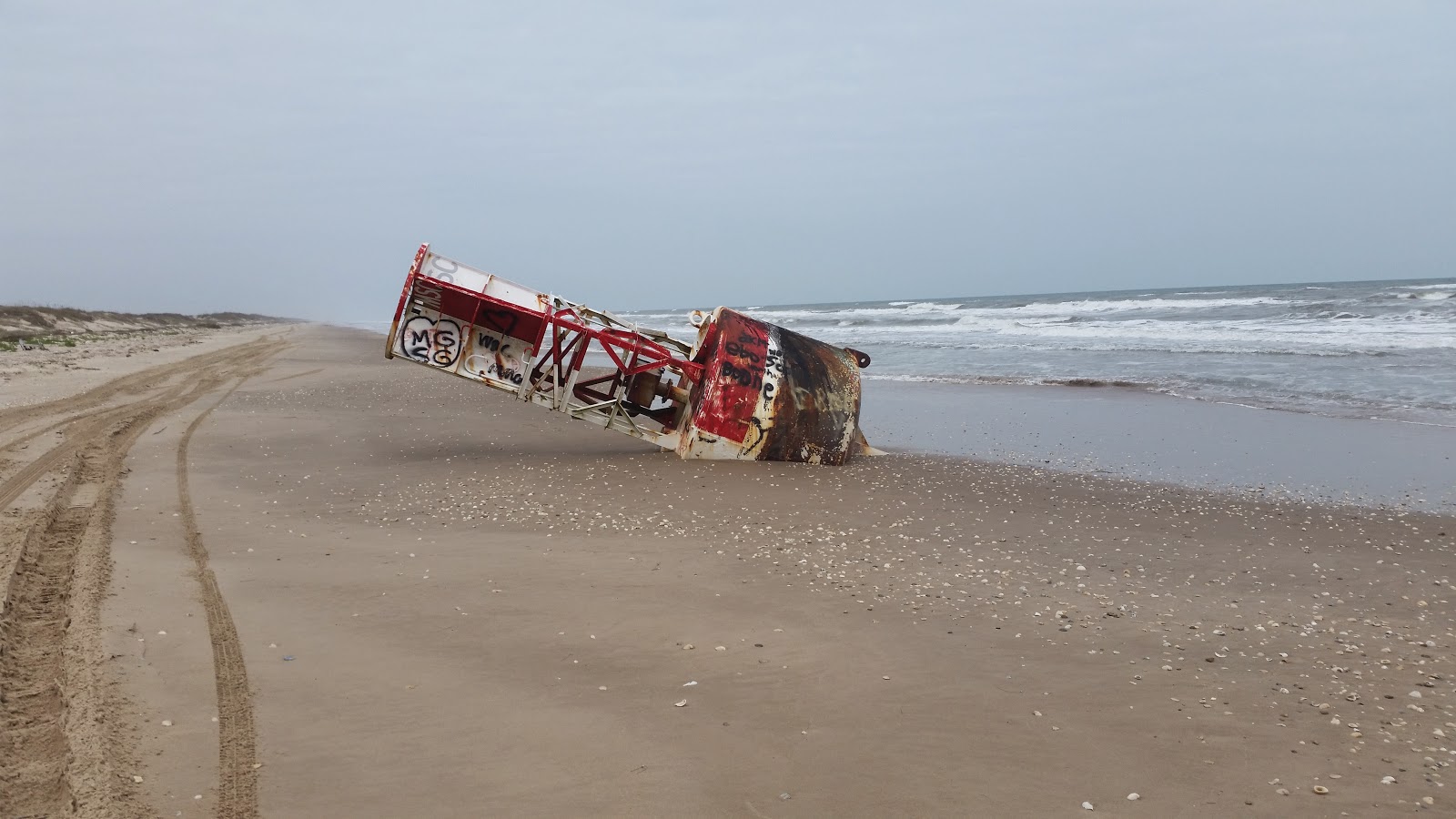 Here we are at mile 60. That was a long ride at the 25 mile speed limit. We kept it fairly close to the limit...most of the time;) 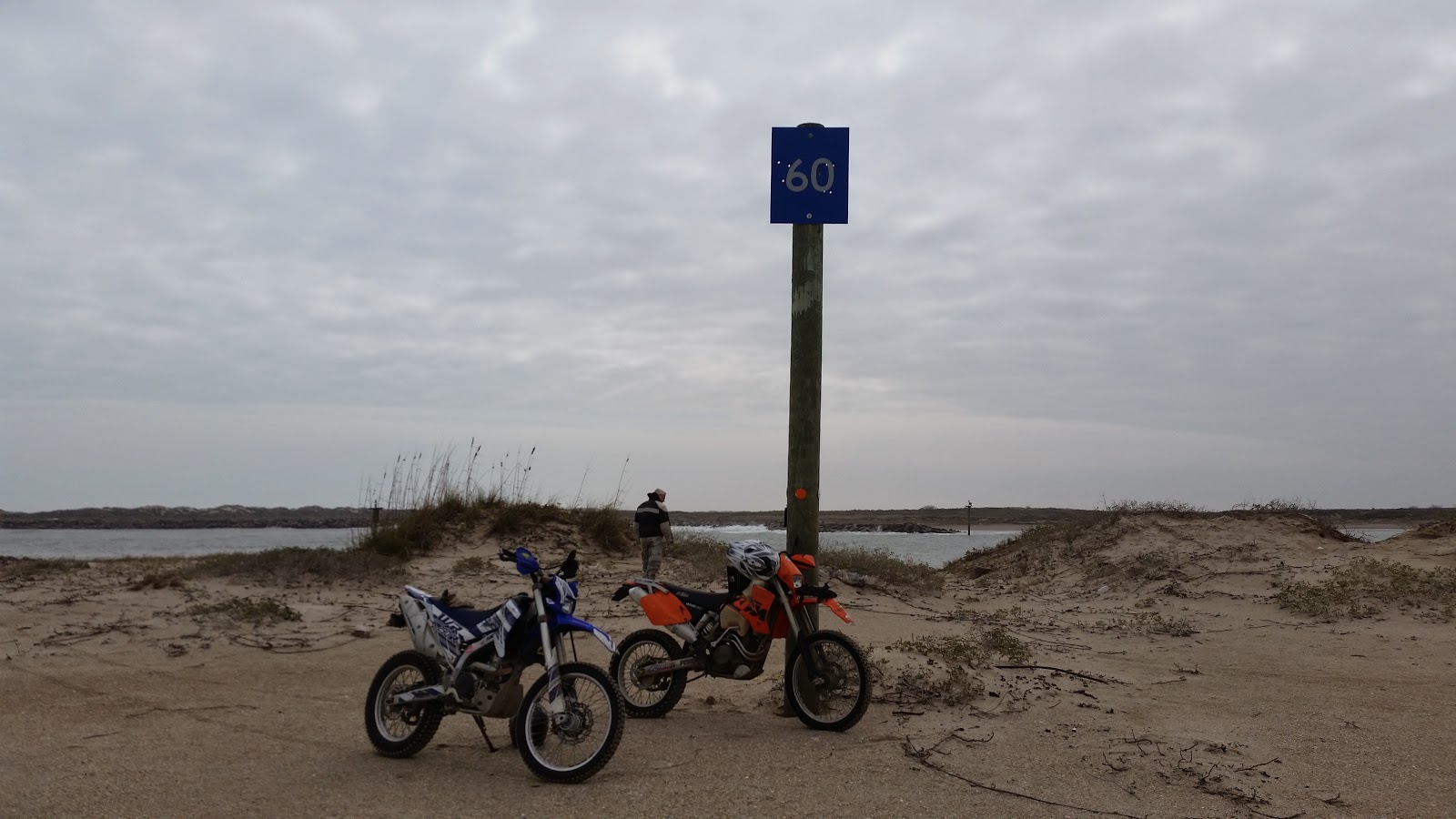 Here is the Mansfield Jetty. That is the end point and the dividing line between Padre Island and South Padre Island. 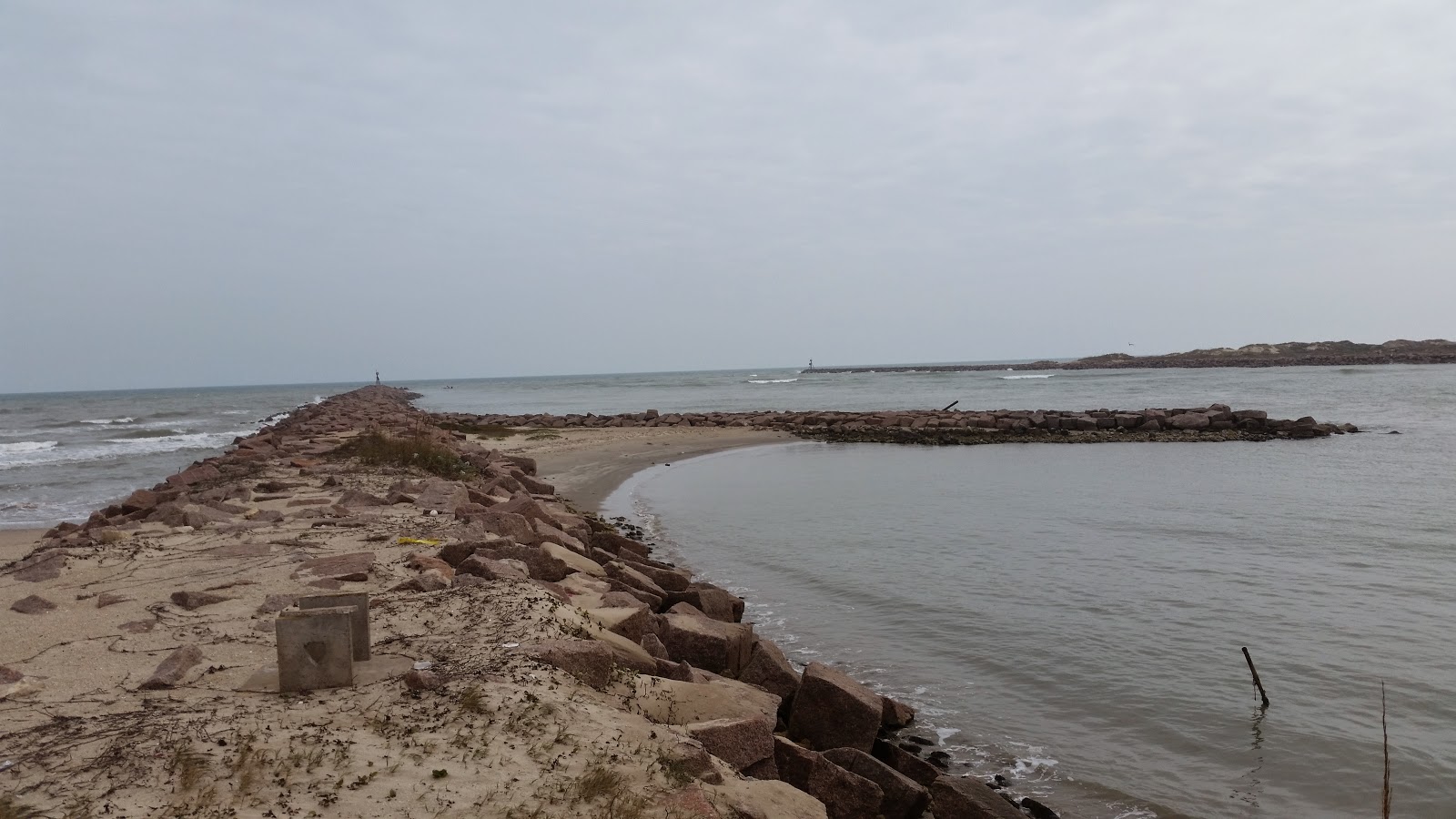 If you look closely, there is an old shipwreck in this picture: 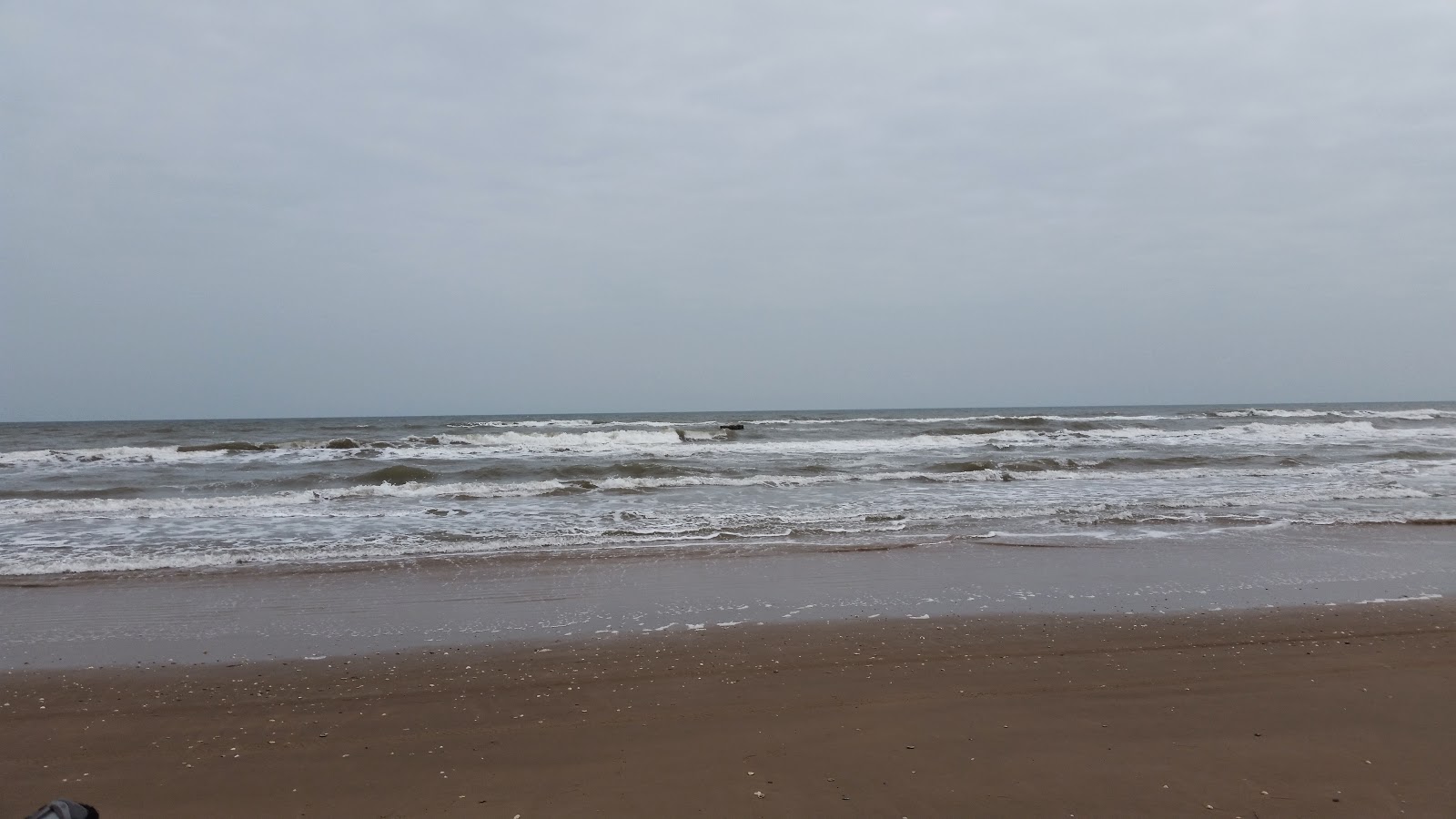 The good news is we made it on gas. When I got back to the 10 mile mark, i was quite relieved to see our gas can. i had about a half gallon left in my tank. We ended up riding 170 miles total. It was a fun ride and I am really glad I did it. Thanks, Jim! 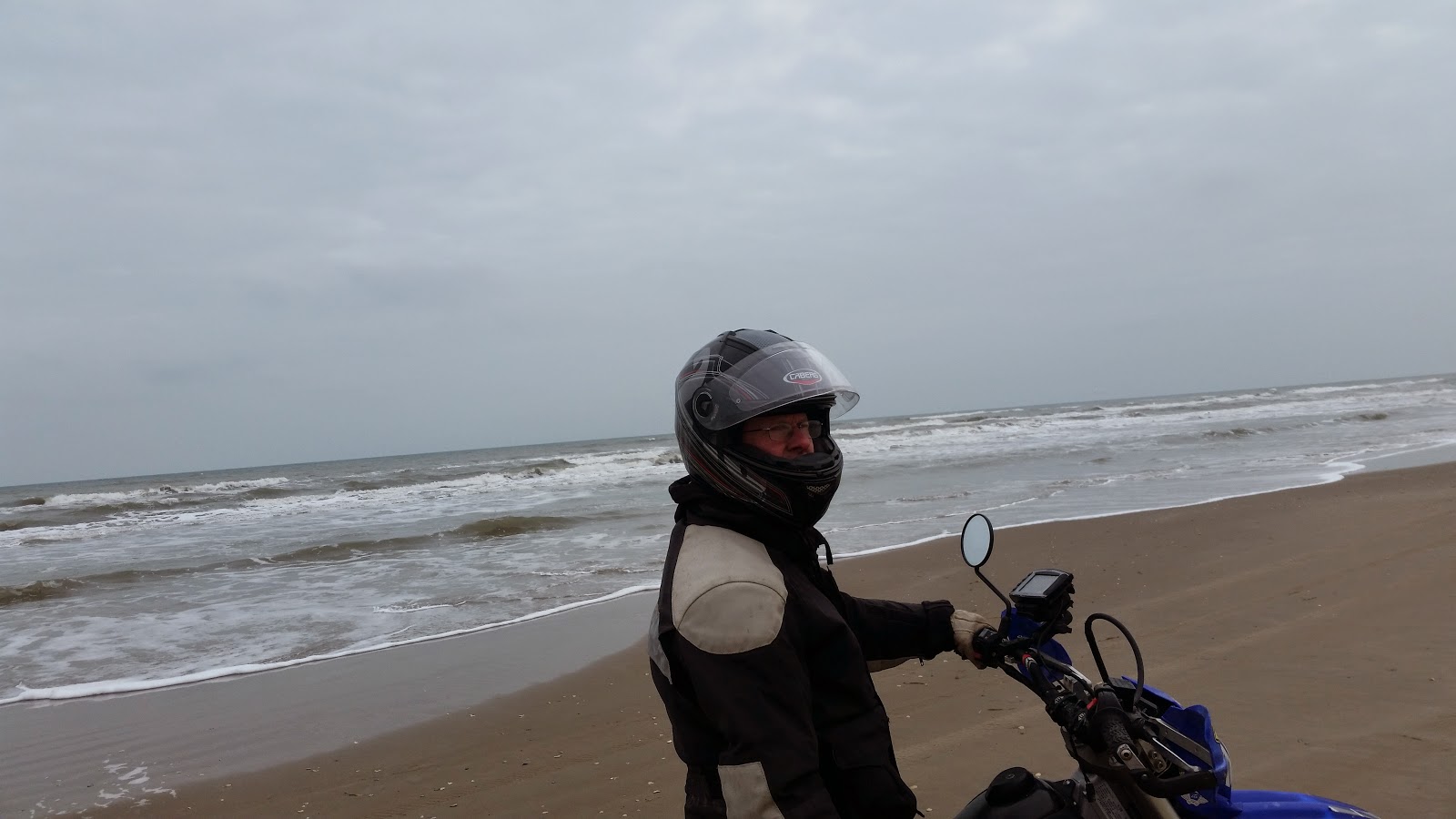 I went down to the pier to go fishing, but the surf was so heavy, I could not fish, so I took this video:

Turn the sound up and you might get the sensation of standing out at the end of the jetty on a large rock and having the waves crashing all around you. It really was an awesome feeling.