A Ride Through Dixie

After our full day of touring Zion National Park, we decided that April 30 would be a rest day. We have found that if we just go, go, go, the experience is diminished. You get in a mode of just getting through it because of fatigue. That is not the experience we are looking for. So, we rested. Well, at least I did for the morning. Then I decided to explore the riding trails that are just west of our campsite in the Dixie National Forest. I got as much local information as I could, and then headed out.

The first thing I came to was a “Road Closed” sign. I took that as a challenge. It turns out, I have no idea why the road closed sign was there. The road had some recent culvert work done, but was very passable. It was a nice dirt road through a beautiful pine forest. After a while, the results of a recent fire were evident. It was a bad one, with entire hillsides burned. I came across a designated trail intersecting with the main road and the fun began. I rode for about five miles and the trail was getting rough. Then I came to this: 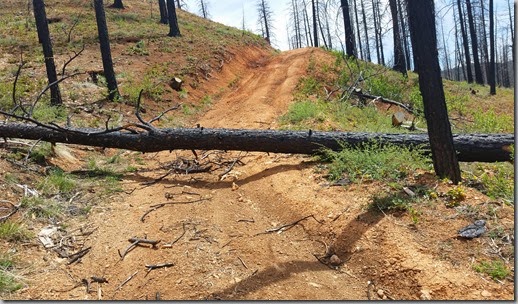 The trees in this area were burned out and I had more to discover, so I turned around to get back on the main road. 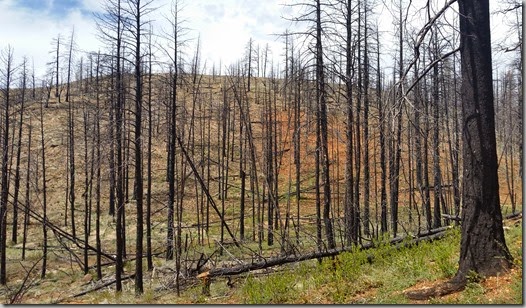 I rode for about 10 miles and came to an intersection. A sign there said “Harris Point”. That sounded kind of cool, so I took off down that road. All of the roads I was riding were 2 track. It looks like this is an area that Side by Sides and 4 wheelers use heavily, but on this day, I had it all to myself. I never saw another person or vehicle. I came to a nice viewpoint and took a few pictures. 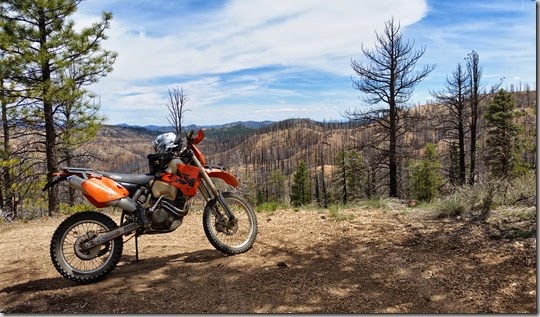 That was a nice view, but I rode on to the Harris Overlook and it was much better. 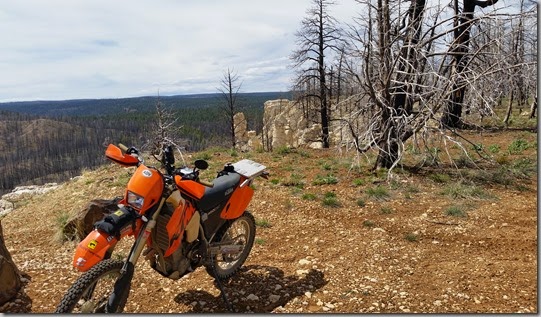 There were some white Hoodoos there and a sheer cliff. It was very cool. 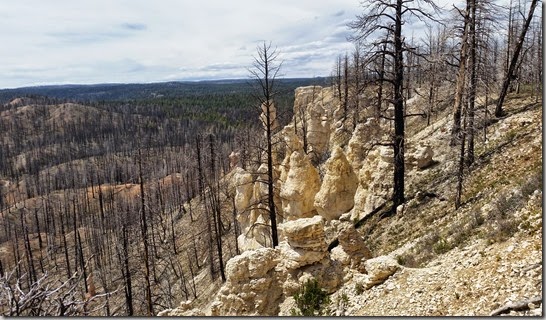 You can see that this area is burned out also. I found out later the fire happened three years ago. It is just part of the natural progression of life in the forest. The new life was already starting to take shape. 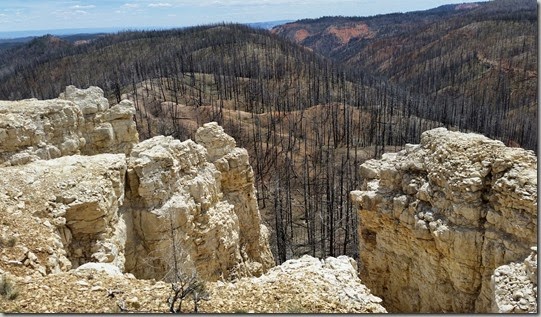 I went back to the main road and took a guess. I knew I needed to head East, so I took a trail marked #7. It was marked blue for medium difficulty. It was still a two track, but had some steep rutted hills on it. It was fun. Soon I was in a non-burned out part of the forest and it was beautiful. I took a few shots to remember the view: 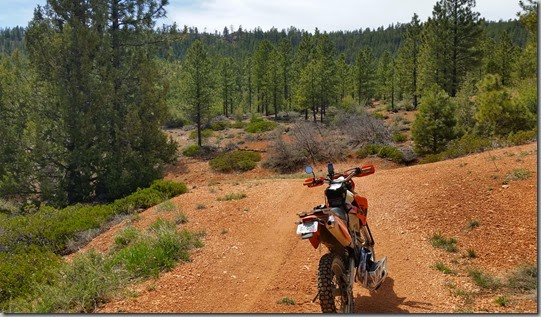 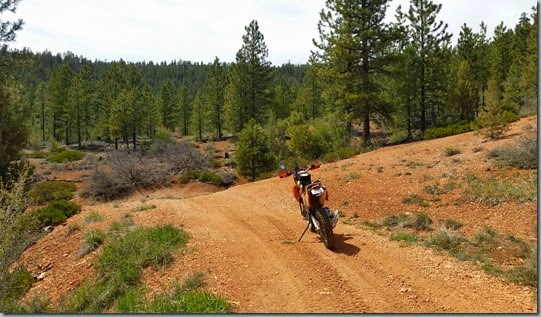 It is really hard to capture the ride without a video camera mounted on my helmet. A GoPro may be in my future, but we made another significant purchase recently and it will have to wait.

Trail 7 took me past a few single track trails that I decided were a little too chancy for me riding by myself. I was right about the direction and soon came to the highway that runs right in front of the campground. I rode about 3 miles of pavement and I was home.

It was a really fun ride and it felt good to be back on the bike. I am really glad I brought the KTM 450EXC on this trip. It is much more capable of a dirt bike than the DR 650 I had on my last trip, and is still street legal. I ended up only riding about 30 miles. I needed to save myself for the adventure tomorrow. On May 1, we would hike the “Narrows” in Zion. I had no idea what to expect. As it turned out, It was the most enjoyable hike I have ever taken. My next entry will explain that very bold statement.

Who knew Dixie was in Utah?