Kim has not been to Salt Lake City other than to fly in or out, so a tour of this beautiful city was in order. On Friday and Saturday May 8,9 Laurie and VaLair played tour guide and took as to a number of the cool places of this area.

We started our tour with the Heritage Park. This is the place that Brigham Young declared, “This is the place”. Much of our tour was to historic places related to the LDS church. We really wanted to learn more about the religion. I think there is much misunderstanding of the Mormon religion and I would like to learn more, so that I can speak intelligently about the LDS church. Without understanding, fear sets in and can cause division and hostility. Laurie and VaLair are LDS members and were excellent tour guides and were very helpful in answering our many questions. 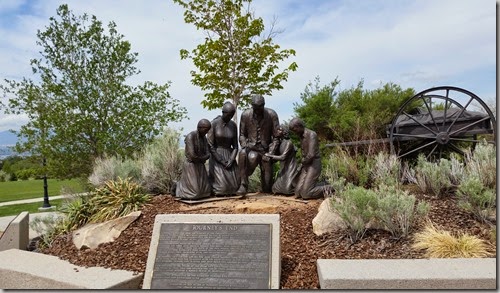 Many Mormons walked over a thousand miles pulling a hand cart with all of their worldly possessions to escape religious persecution. What a feeling it must have been to finally reach Utah and see this beautiful valley. Of course much of it was dessert at that time.

Did you know the state bird of Utah is the seagull? They had a swarm of crickets come to eat their crops. If they had, the pioneers would not have survived their first winter. Seagulls came in from the Great Salt Lake and ate the crickets. Here is a monument dedicated to that happening: 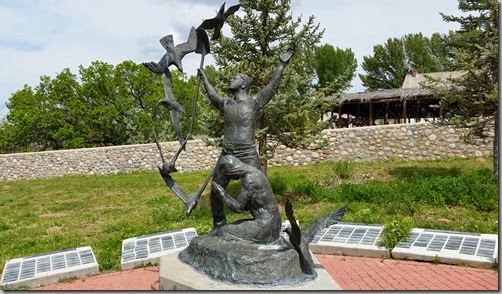 We decided not to tour the rest of the park and head to Temple Square. We drove by the Olympic Cauldron. The Winter Olympics were here in 2002: 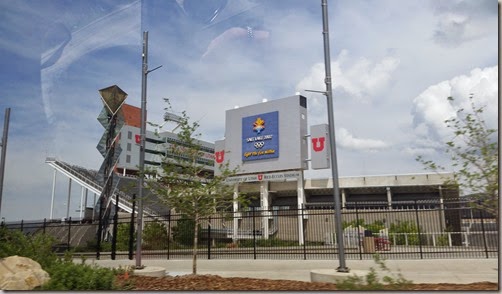 Temple Square is in downtown SLC. It is a beautiful city. The missionaries that are working as tour guides are extremely friendly and helpful. We could not go into the temple, but the grounds are beautiful. 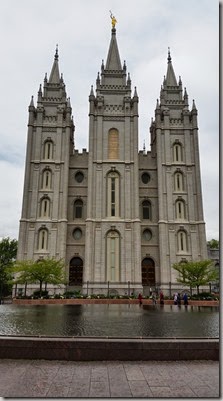 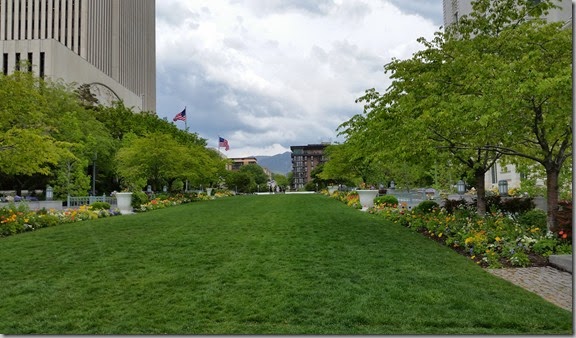 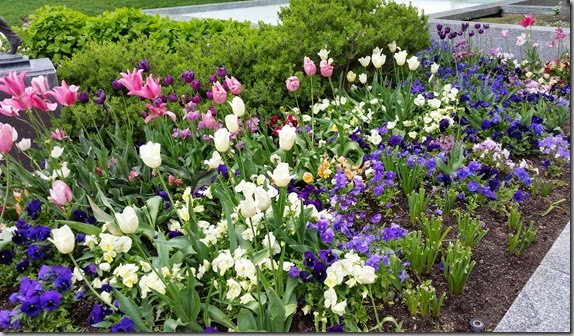 Here is the roof of the Mormon Tabernacle and an inside shot of the pipe organ. 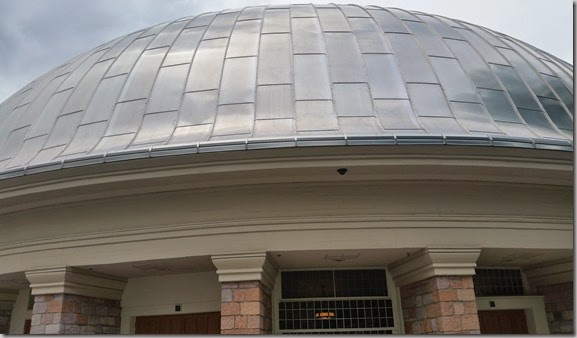 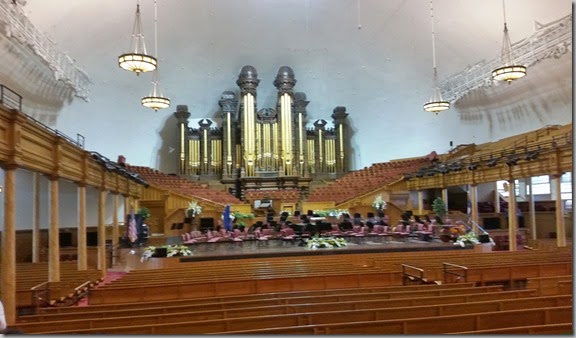 That would not be the last time we were in this building, but I am getting ahead of myself.

We went to the two visitor centers and Assembly Hall. 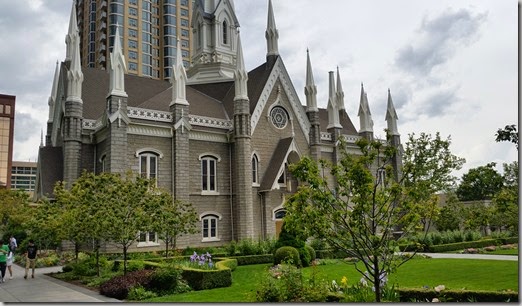 Here is a model of the inside of the temple. 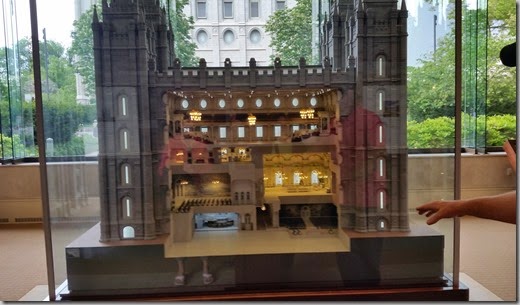 Then we took a tour of Lions house and Beehive House. This is the home of Brigham Young. He had a very large family due to many wives. Polygamy is part of the history of the LDS church, but is only practiced by cult off shoots of the religion today. 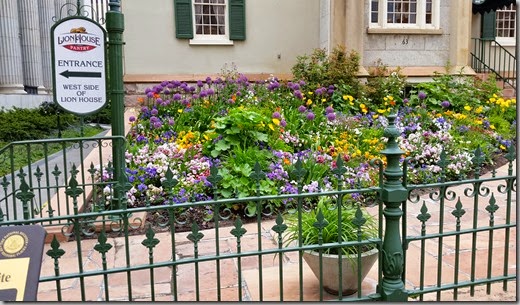 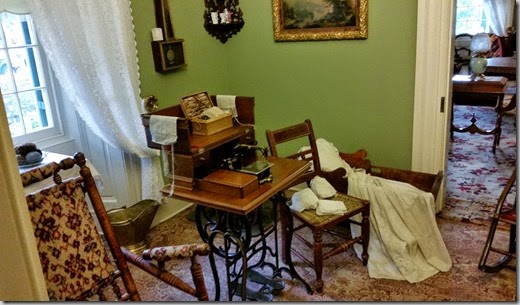 We then went to a building that was the Utah Hotel, but now has been converted to the LDS library. The lobby was beautiful: 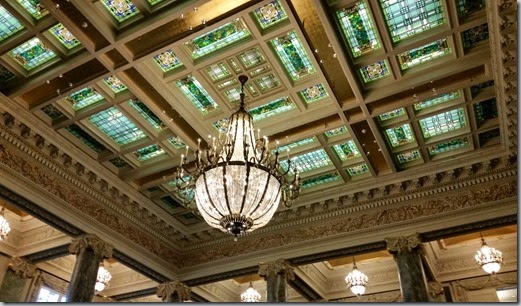 I just loved this chandelier. 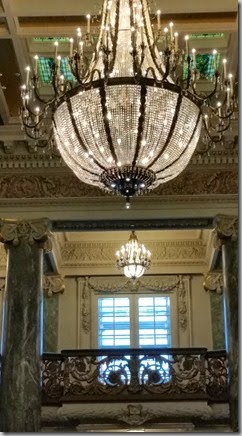 They have a free genealogy center here. I asked a lot of questions about why this is important to the LDS church, I am still not sure I understand it. This is still an excellent resource. 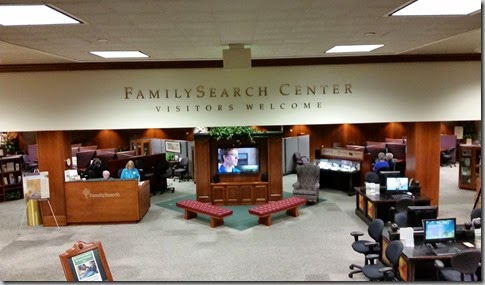 We went up to the 10th floor and got some nice shots from the observation decks. 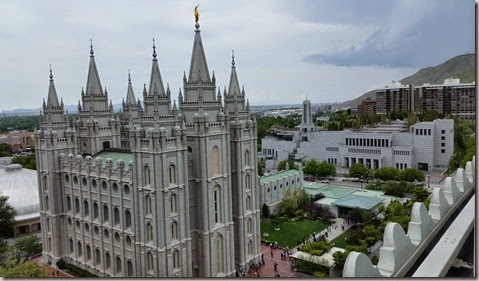 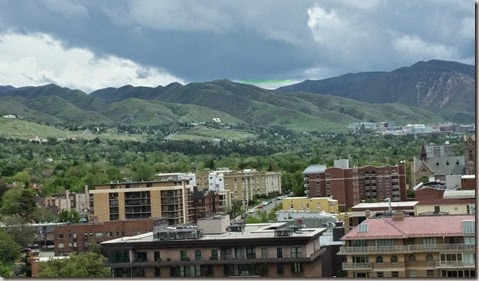 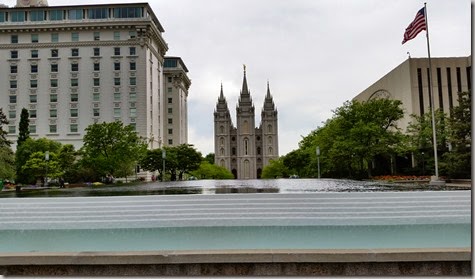 We then stopped for lunch at Hires Drive in. Great burger and milkshakes. Sorry, I don’t take pictures of food.

Then we took a drive up to Park City. That is only about 45 miles from downtown SLC. That is one of the things that makes SLC such a neat place. It was cloudy and rainy in SLC. It was snowing up in Park City. We took a walk anyway. 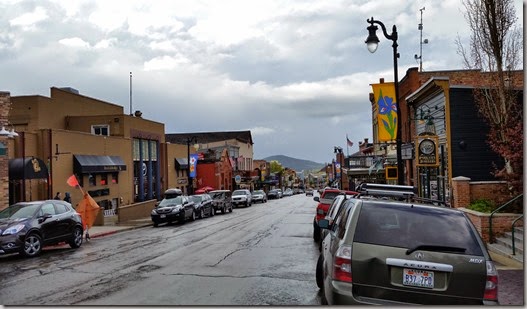 There is some serious money in this area. The amount of new building was shocking even to Laurie. I saw a BMW i9 on the street. That is a $175,000 car.  Here is Kim’s new friend: 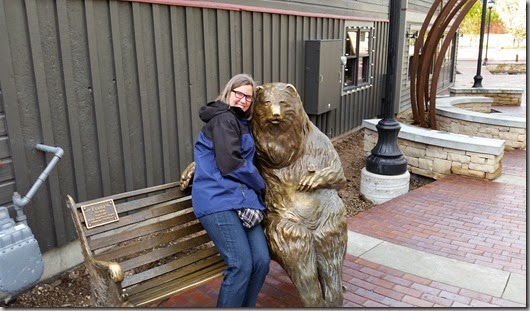 We then finished the circle by driving south through the mountains. VaLair suggested we stop at Bridal Veil Falls. That was beautiful: 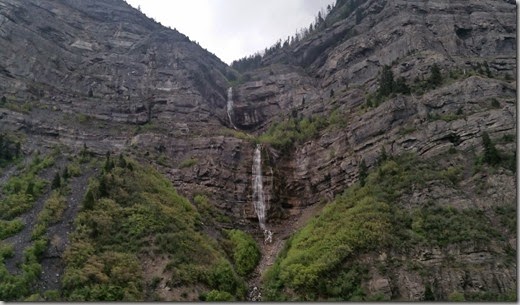 The surrounding mountains had some interesting geological features. We have learned a bunch about rock formations in the past few months. 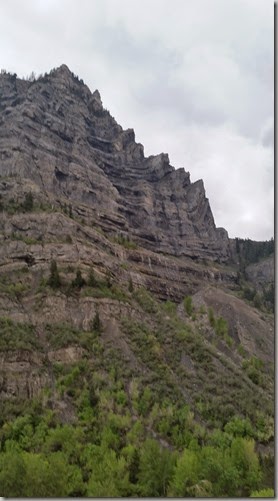 We finished the loop and got back to our home. I will have to mention the card game on Friday night. Kim was able to catch on to the game of “Build a Bridge” quicker than I did and finished second. VaLair won, but that seems to not be uncommon. Let’s just say the guys had some catching up to do. It was a full day.

Rather than criticize something you don’t understand, take the time to educate yourself and focus on tolerance and freedom.

The tour will continue with the Great Salt Lake and a family gathering.