On Wednesday, May 13, we went for another paddle in the kayak. It was getting a little windy, so we stayed close to the launching point. It was a fairly warm day and we learned a bit more about how to paddle in harmony. You may read into that what you would like.

We met some folks that were from Holland. They are traveling full time in their 5th wheel throughout the US, Canada and Mexico. Tom and Bianca are a bit younger than us. They were interested in our Sea Eagle, so I gave Tom a demonstration on how it inflated and deflated. They look like they are having an awesome time. It is always fun and interesting to meet other full timers from other countries.

Later that day the weather got nasty with wind and cold rain. It would last for a few days with some snow on the peaks surrounding the valley we are in. We were considering moving up to Bear Lake or other campgrounds, but staying put made more sense. We had electric, Cell and TV. We just hunkered down and watched some movies and got caught up on some TV shows we like. We love lazy days. 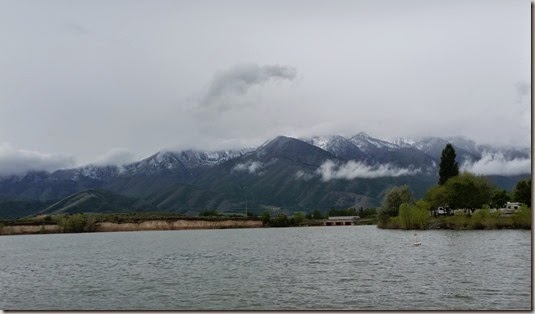 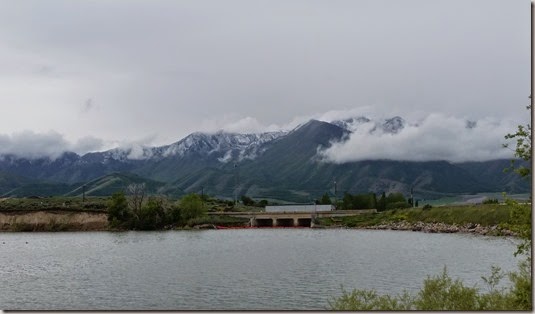 We ended up deciding to stay through the weekend because they had a cancellation for our site. The rest of the electric sites were booked, so luck was shining on us again.

The campground filled up for the weekend with an RV club. We were right in the middle of it and our view was a bit diminished, but they were nice folks and braved it out through the rain and wind.

On Sunday, we went to church and then decided to take a drive. We started by driving up a canyon into Hardware Ranch Wildlife Management area. We were hoping to make a loop of this drive up to Bear lake and back down Logan Canyon, but when we got to the end of the pavement we saw other vehicles covered in mud and decided we did not want to do that. There are hundreds of miles of ORV trails at the top of that canyon. It looks like you could ride for many days and not see the same trail twice. Utah is very ORV friendly. Almost every place we go has ORV trails that lead out of the campground.

The rock formations up this canyon are very cool. Here are a few snaps: 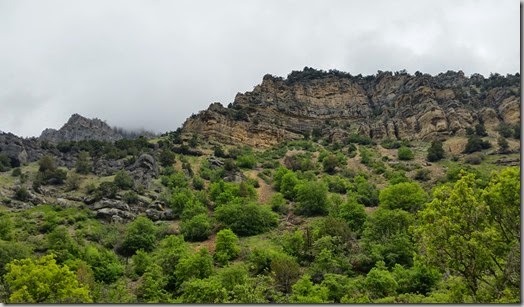 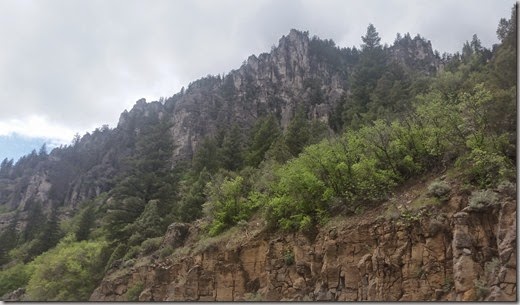 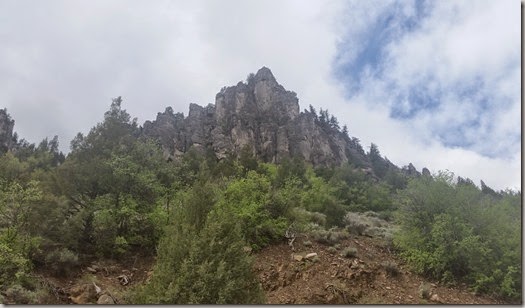 There is also a beautiful river that had awesome fishing spots. We saw a number of people out fly fishing. 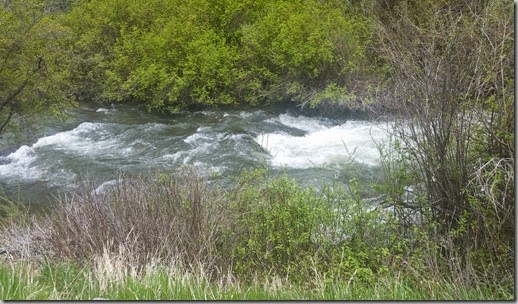 We went back to Logan and headed up Logan Canyon. It has a better highway, but the scenery is just as good. They do a bunch of snowmobiling up there. Here is a shot of that area: 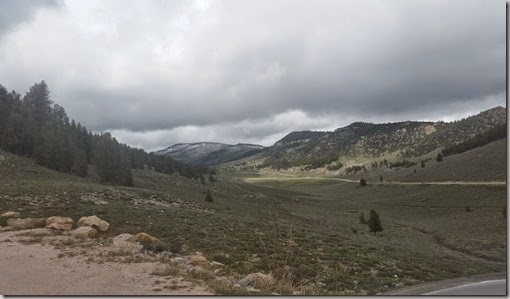 Once you get to the top, about 7600 feet, it drops down into the valley and Bear Lake. This is a natural lake and is very large and very beautiful. 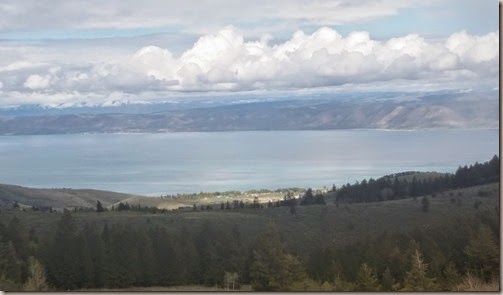 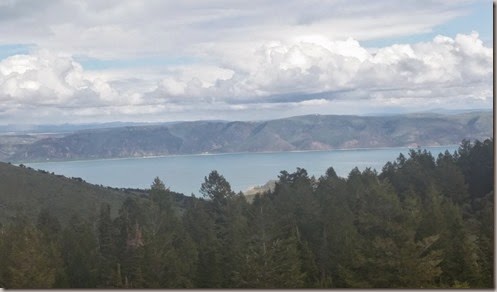 They have found that this is the perfect environment to grow raspberries. Unfortunately it was too early in the season to pick some. They have a number of shops that make Raspberry Shakes. Sounds good, but we decided not to have one because the raspberries would not be fresh.

We took a drive along the lake and you could see the lake was down significantly from the docks and boat ramps. Maybe all of the rain we have been getting will help them out. On the drive back up the hill, we saw a moose cross the road in front of us. Very cool. 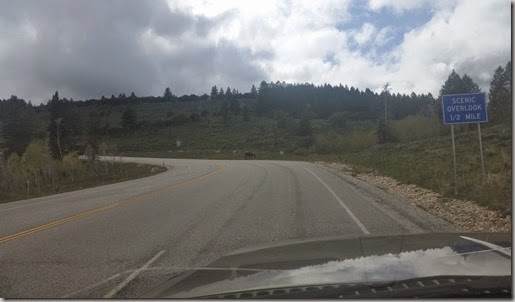 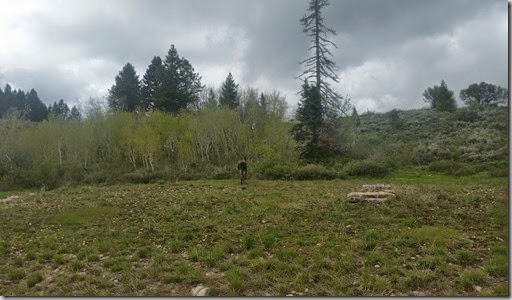 We stopped off at a Ricks Spring on the way back down the canyon. That was pretty cool. 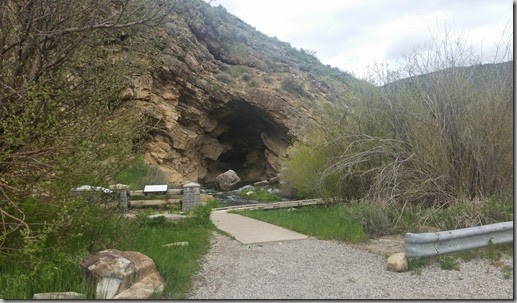 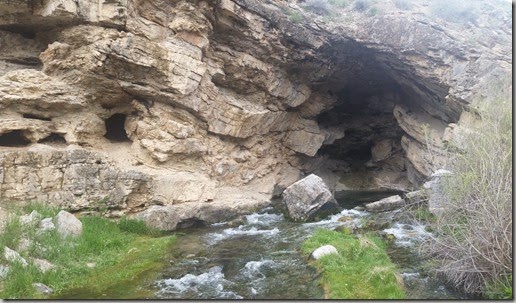 The flow was very significant. 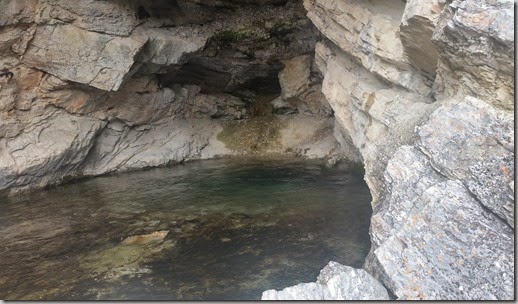 Note to my Dad and brother Alan: On the way down the canyon we went by a ski area called Beaver Mountain. Is that the ski area we skied at on the trip we made to Utah in 1973 or 1974? I remember us stopping in Logan because Dad had some work to do at the University, but I am not sure. Do you remember?

It was a another good day of exploring and Bear Lake was very beautiful. The weather was only slightly improving over the next few days, so we decided to move on. We were not sure where we would stop. What we found, was another one of those hidden gems. Come back in the coming days to hear about that.