On Friday, May 1, we planned to hike the “Narrows” at Zion Nation Park. I was not sure  about this hike. Although we had visited the jump off point a couple of days before, I was concerned it was kind of a gimmick outing. We really like creek walking, but with the cold water, I thought we could just walk a half mile or so and call it good. After talking to a number of folks that had just finished the hike, many were just wearing sandals and told us that is all you need. So, me being cheap, we decided to go with our own gear and see what happened.

We drove into the park and had to park down in the town of Springdale. Then walk to the park entrance and get on the shuttle and ride it for 40 minutes up to the trail head. Then we walked the 1.2 miles up to the end of the dry trail and into the Virgin river. It was after noon by the time we entered the water. That was fine we were only going a short distance…or so I thought. It was close to 80 degrees, so the water was actually refreshing.

Here was our gear for the hike. I went with a Motorcycle Jersey because if it got wet it would dry quickly. We went with old tennis shoes and I wore some wool socks. The gear turned out to be perfect. I had a backpack with our lunch and extra dry clothes in a dry bag. 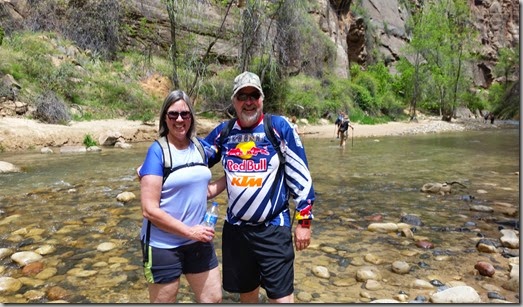 The canyon was beautiful with high rock walls. The water was not too cold. Here  we go… 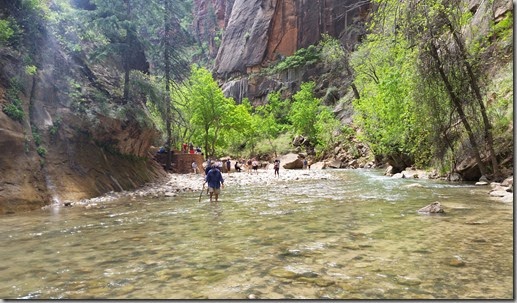 It was not long before I noticed, I was really having fun. There were no steep climbs and my years of wading while fly fishing gave me good confidence. The fact that the scenery was breathtaking did not hurt either. Around every corner was a new rock formation. 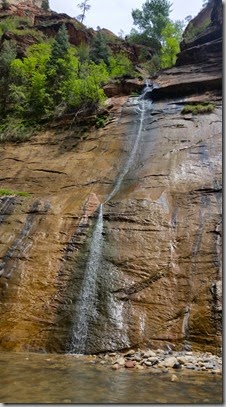 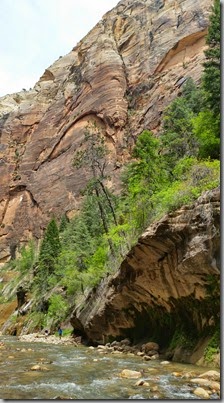 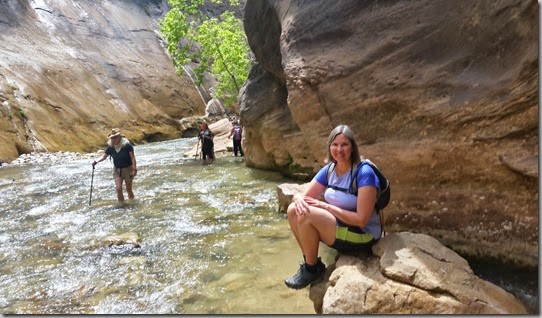 We had people around us all day, but it was still an isolated experience because of the noise. The river rapids reverberated off of the walls and it was hard to talk to each other unless you were right together. Kim was having a blast also. 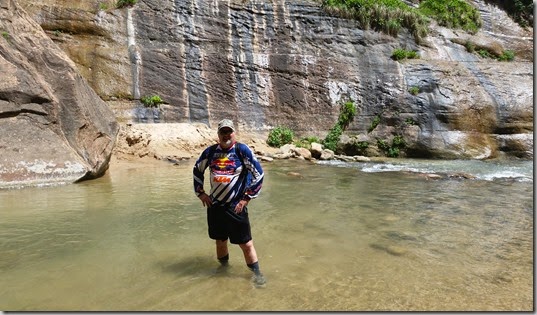 The river did a job on some of the rocks creating interesting things to look at. 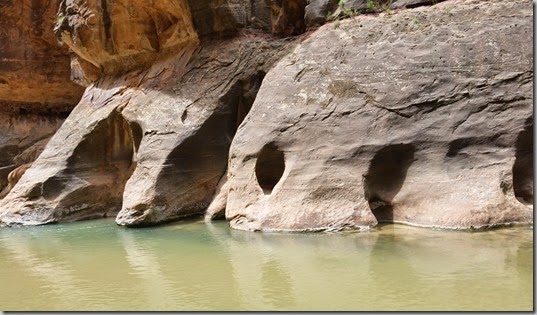 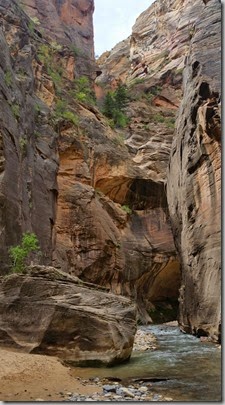 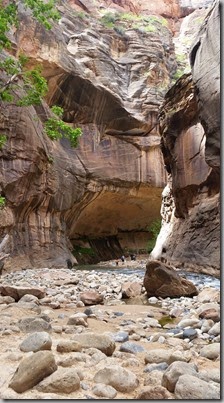 Look at the people in the picture on the right above to get some of the perspective of the size of the canyon walls. 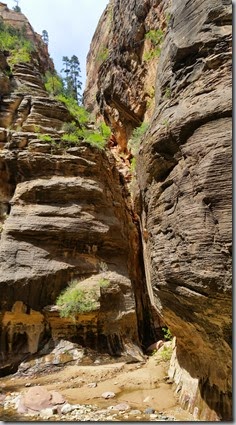 As we moved up the canyon it got more narrow. We could only see a small slice of the sky at times. 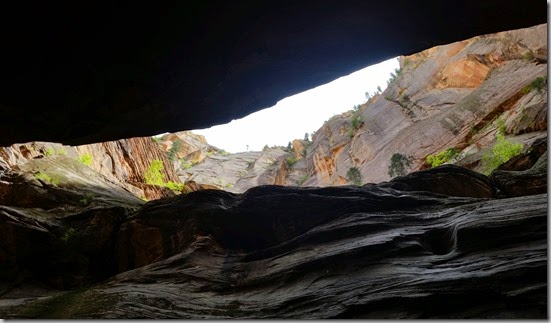 After a couple of hours we stopped for lunch. I found a nice log to sit on and we just enjoyed the beautiful scenery. We came to an intersection of another small stream. We decided to take the smaller stream for a while. It was also beautiful and very narrow. 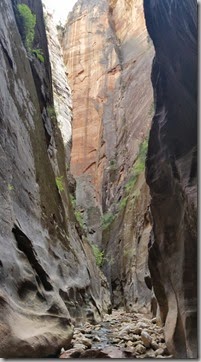 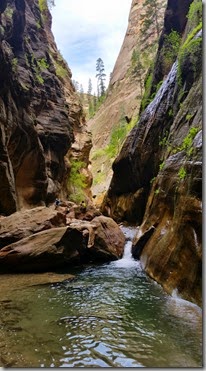 We got to this small waterfall and decided that we should turn around and go back to the main river. On the way back a couple guys from Buffalo, NY noticed my jersey. They were on their way to Las Vegas to watch the Supercross race on Saturday night and stopped off at Zion to hike the Narrows. We had a nice conversation and then we continued on with our adventure.

Next we came to a large rock laying in the middle of the canyon. It just looked awesome. 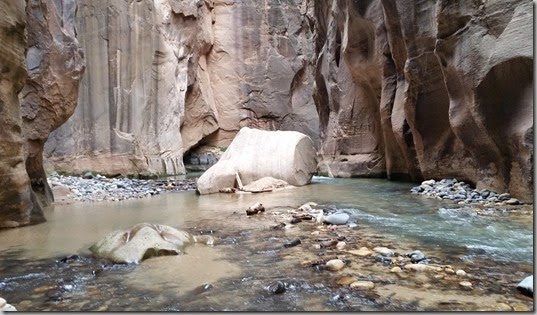 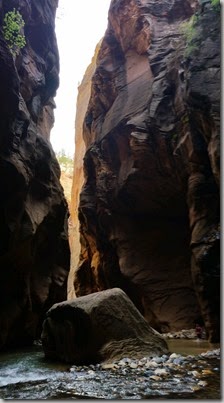 This is the same rock from the back side. As we went further up the canyon it became very narrow and the water got deeper. It was at this point we looked at the clock and I was surprised to see it was 4:00. We were getting a bit tired and I was concerned about how long it would take to get back to the truck. We decided to turn around.

As we walked back I noticed we were moving much quicker than we did on the way up. Time was really not an issue. I slowed our pace to make sure Kim did not get too tired.

When we got back to the waterfall that I taken a picture of earlier, there were some guys rappelling down the rock. It was very slippery and one of them fell against the rock. He was fine and protected by his equipment. 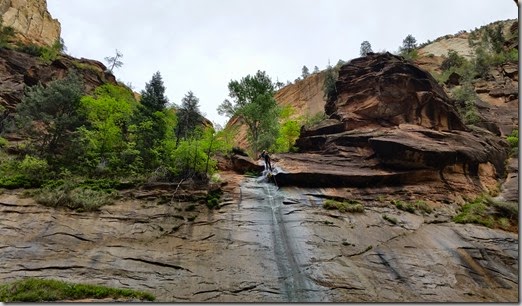 We made it back to the trailhead in about 2 hours. Kim was pretty tired, but she was more interested in getting to the bathroom at the bus stop. We moved out and made it there quickly. By the time we made it to the truck it was 7PM. We were starving. We found a pizza restaurant and ate heartily. Then we had to get an ice cream cone. I felt we earned it. Here is the view from our restaurant. 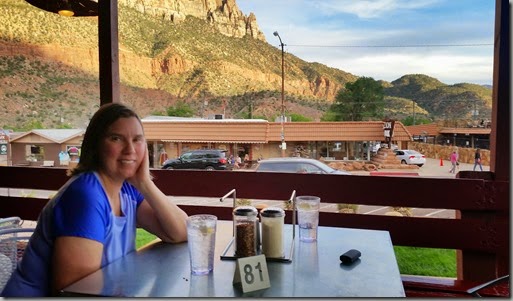 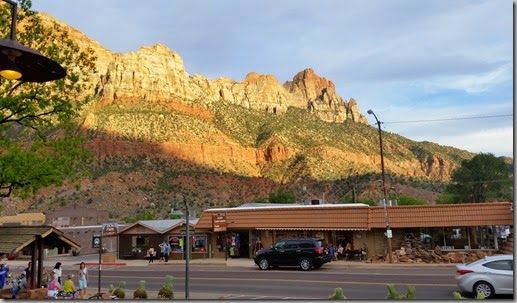 It was an awesome day and any thoughts of this being a “gimmick” hike were long gone. This was an awesome adventure and I had a blast. If I ever make it back to Zion NP, I will do this hike again and go even further. It is really that much fun. I think we walked up about 3 miles, but that is only a guess. This is a hike that almost anyone in basic hiking shape can do. If you ever have the chance, be sure to take this hike.