On Saturday, May 9, we continued our tour of the Salt Lake area. It was a very rainy day and we got a late start. I invited Laurie and VaLair over to our trailer for breakfast. I love to fix breakfast for a group. One of the best features of our trailer is the “show kitchen”. It allows me to talk to our guests while I am cooking. French toast was on the menu.

We headed out to see the Kennecott mine. This is a huge copper mine that is very interesting to look at. Unfortunately the main area is closed due to a rock slide that wiped out the visitor center. The mine reminded me of Erzberg in Austria. I took this one shot before they asked us to leave: 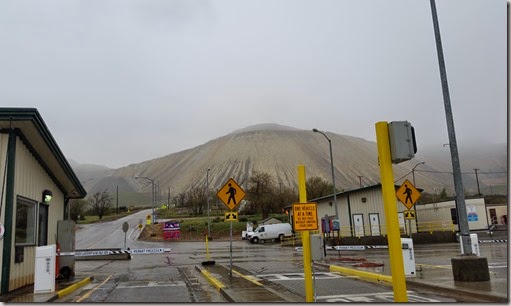 We then headed out to the Great Salt Lake. It was raining, but I did get a couple pictures with the low clouds and rain. 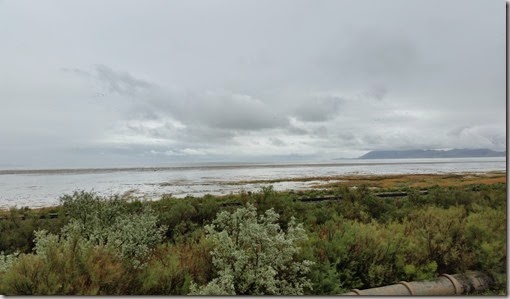 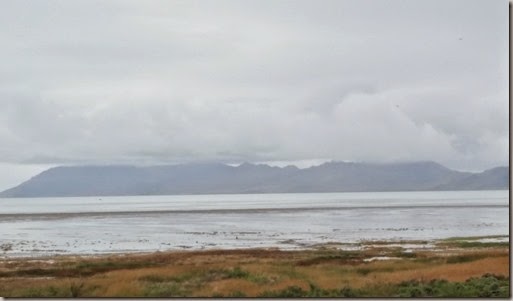 The rock formations in the area are very interesting. They do a great deal of mining in this area and have for many years. They mine silver, copper and coal. you can see the uplift that exposes the minerals. 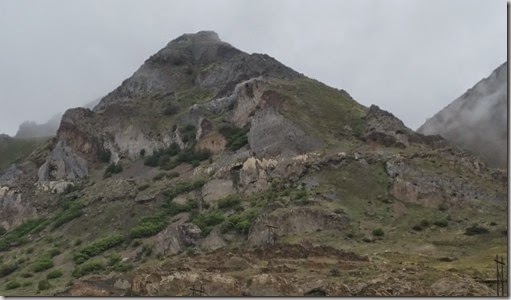 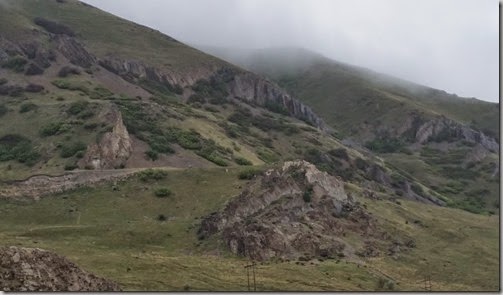 We then went to the Miller Barber race track. I did not get any pictures because of the rain, but you could see the MX track and the road course. We had plans for a family outing that evening. Laurie and VaLair have a great family. They have 3 grown kids and 7 grandkids. We went out for pizza and then bowling. I love this picture: 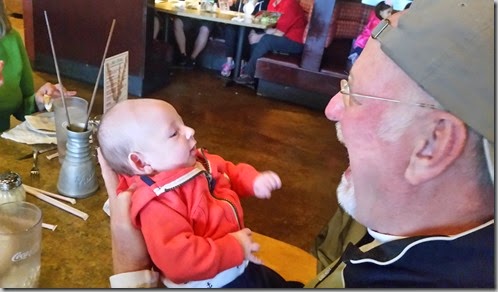 That is Laurie with his youngest grandson, 5 week old Bronx. They are a fun family. I have known Laurie’s son Berkley and his son in law Taylor for a while. It was great catching up with both of them. Both of them have attended the sales schools that I taught while I was working. 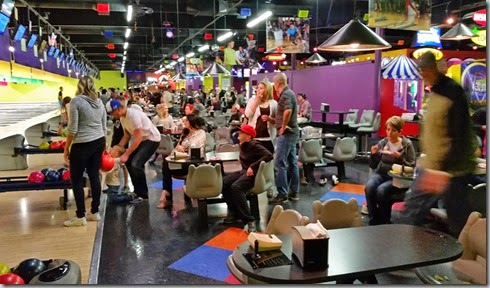 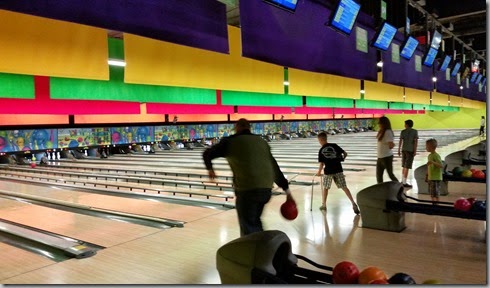 Kim got some baby holding time, which is one of her favorite things. We had a good time. Taylor won the bowling and Laurie beat Berkley by one pin.

Sunday was Mothers Day. We decided to get up early and go to the live show of the Mormon Tabernacle Choir. They do a weekly broadcast. It is only a half hour, but it is free. I really enjoyed the presentation. They do not allow any pictures during the broadcast. No phones, no sound, no kids. The choir and orchestra were amazing. I think it was the purest musical presentation I have ever heard. Just awesome!

We then walked through Temple Square on this beautiful sunny day and up to the Cathedral of the Madeleine for mass. 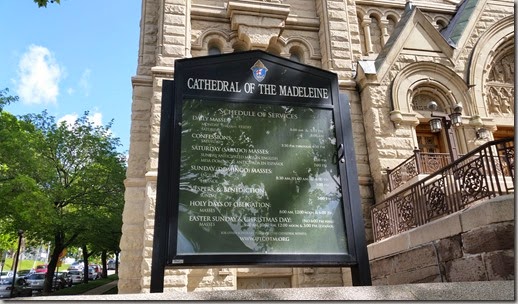 The outside is amazing: 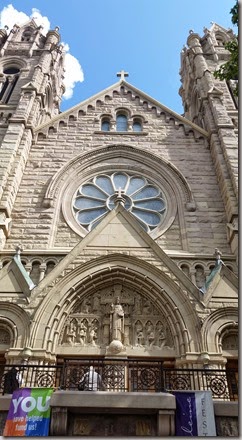 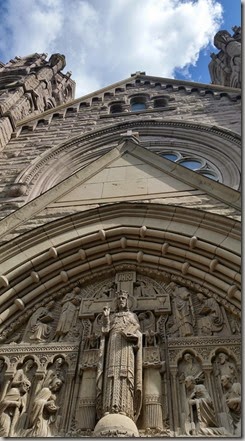 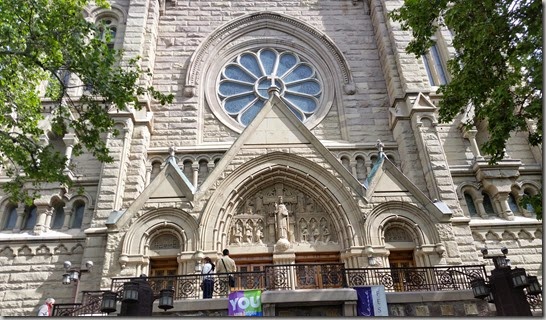 When we went inside, I was shocked. It was clearly a “WOW”. I think it is one of the most beautiful churches I have ever seen. It has incredible wood work, amazing stained glass windows and beautiful murals. 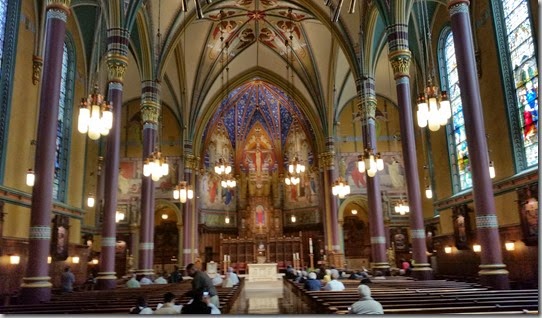 It happened to be the 100 year anniversary of the death of the founding priest of this parish and the builder of this cathedral. They had a high mass with 5 priests. They had an awesome choir made up of mostly boys. That was two awesome choirs in one day. After mass they offered a tour of the church. We had a local deacon do the tour for us and one other couple. It was very interesting and informative. 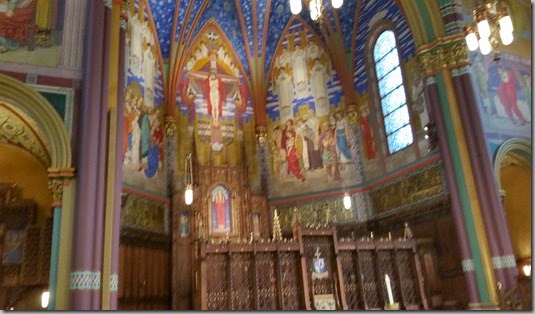 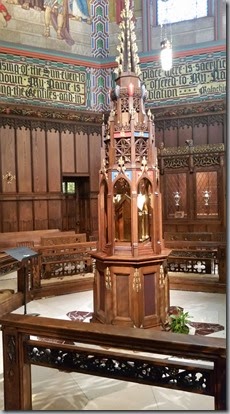 The pipe organ was amazing. 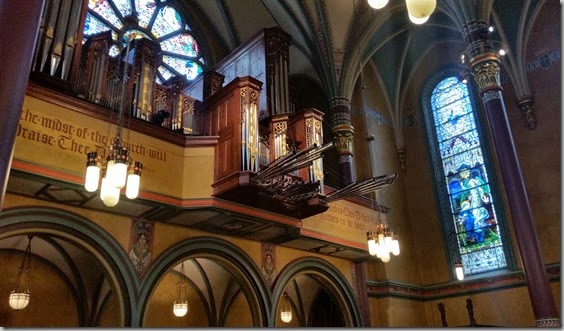 We then took a walk around downtown SLC. They have some real cool houses. 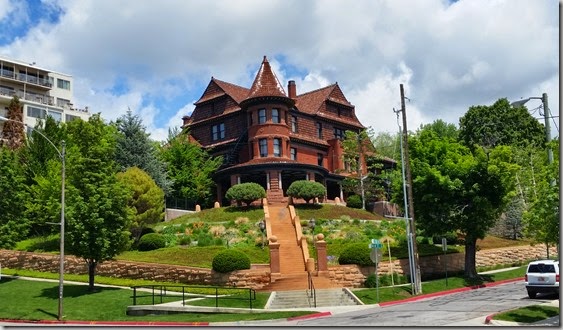 I am pretty sure that Kim enjoyed her Mothers Day. One of the keys to a happy RV lifestyle is diversity. We enjoyed our time touring the man-made wonders of SLC. We typically like natural beauty more, but civilization had its advantages.

We finished the day with some more cards. Laurie was happy with the outcome. I once again finished last. 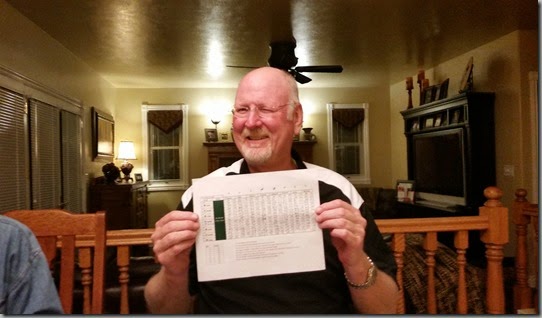 We had plans to depart the SLC area on Monday, but we needed to play golf first. Laurie and I love to play golf together and the weather has not cooperated. The golf turned out pretty interesting, I will tell that story and introduce you to our new vehicle in my next entry.

Posted by ktmissouri at 8:48 AM