On Tuesday, July 7, we all decided to try to do both places in the same day. The primary reason was the desire to have an “off” day relaxing on the beach at Washburne State Park.

I fixed a big breakfast and we all got ready for the long day. We headed south along Highway 101. The first part was beautiful. We had to keep moving, but we did make some stops to enjoy some of the overlooks. This is Heceta Head Lighthouse, which Kim and I would tour on a later day. 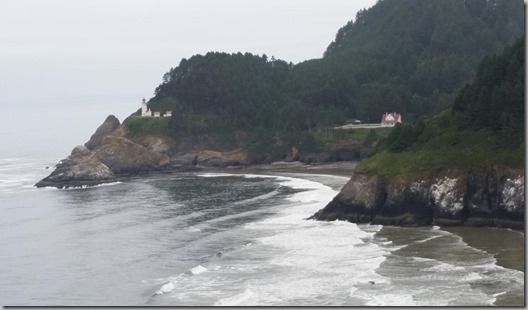 Here is a shot of Cape Blanco Lighthouse. It is closed for tours on Tuesday. 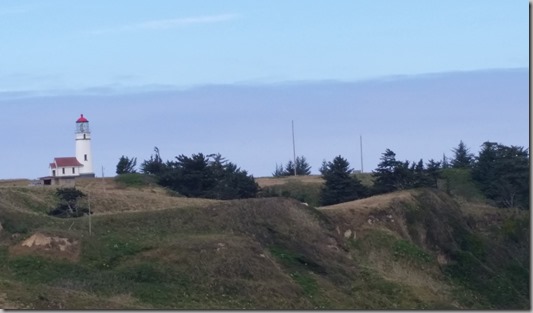 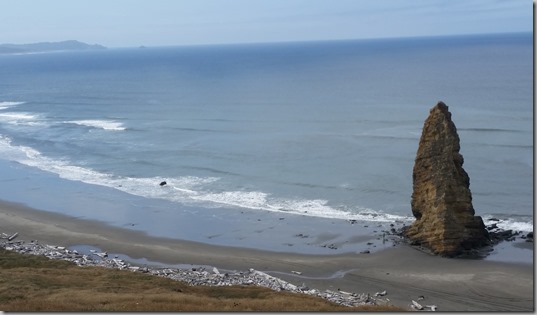 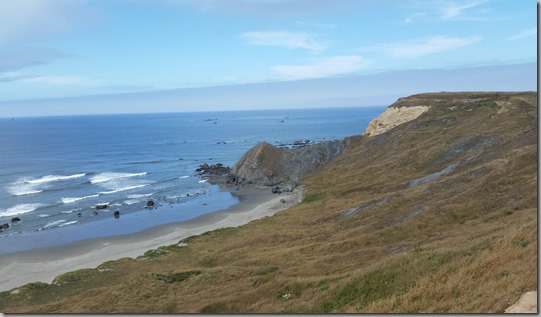 We continued on down the road. Much of the southern Oregon part of 101 leaves the coast. This allowed us to make better time, but when the road returned to the coast, we found more beautiful overlooks and incredible scenery. 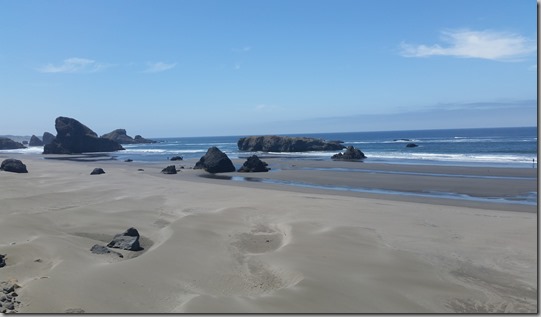 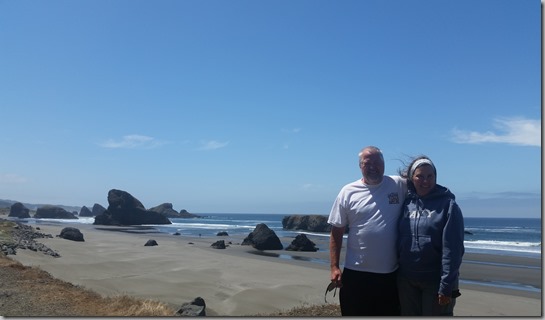 We came to a small coastal town called Port Orford. This town has special significance to me and my motorcycle riding friends. This is the town at the Western end of the Trans-America trail. That is an off-road route that takes you from Eastern Tennessee to the coast of Oregon. 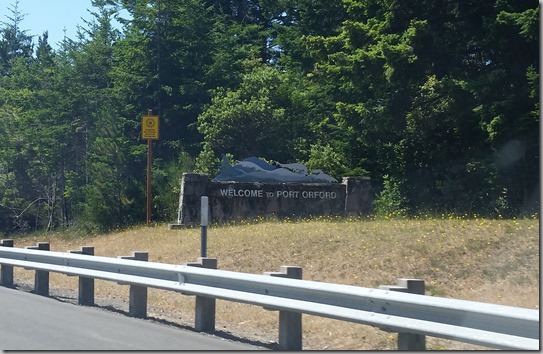 Brian drove this first leg of the day. Each of the 4 of us took our turn, it made it much easier on us. The driver got to choose the music, which opened all of our minds up to some new music. I must say I really liked Shannon and Brian’s favorite music. I am not sure they would say the same for my country music.

We came to a place that had an arch. It was very cool and was a needed rest stop. 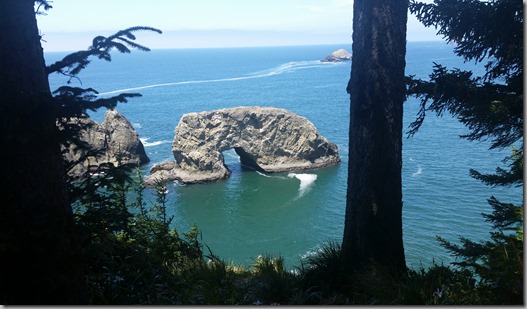 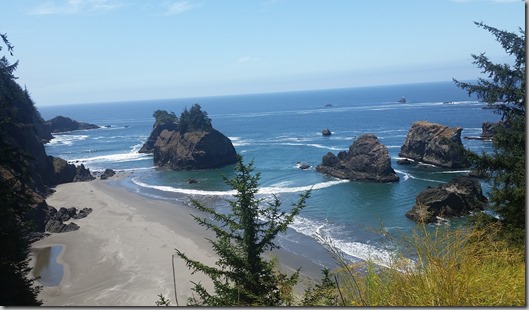 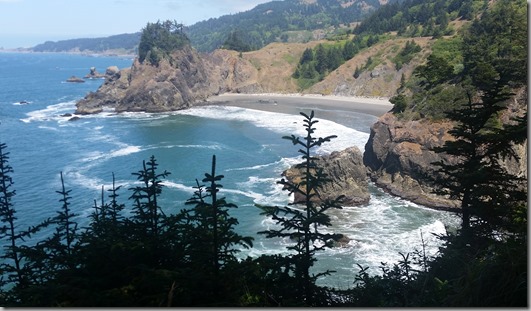 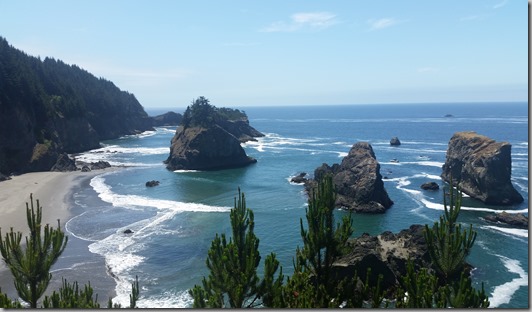 I just love how those pictures turned out. It was a beautiful calm day on the Oregon coast. We got really lucky with the weather on this day.

We continued on and stopped at a grocery store to pick up some fresh fruit to add to our lunch while Brian put gas in the car. Then we drove a few miles to the California border. They had a fresh produce checkpoint there and told us that they do not allow cherries into California. This girl with a heavy Russian accent, who was manning the checkpoint, relented and let us keep them. It was a very strange experience.

The Redwoods National Park is a cooperative effort with the California State Parks. So, it is kind of confusing if you are in a National Park or not. We don’t care, we are counting it. That is number 12 for us on the trip. We went to the visitor center and viewed a short film. Then we went to have a picnic in the forest among the huge trees. The trees are amazing. We had to put people in front of them to show the unreal size. 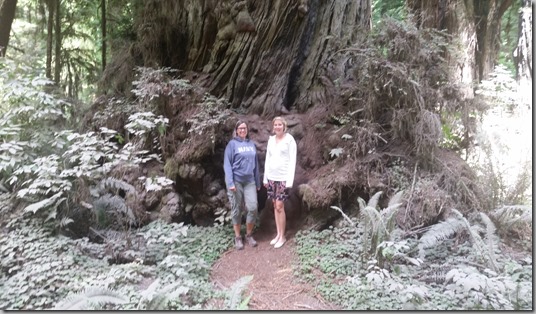 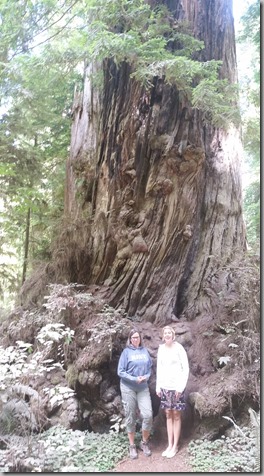 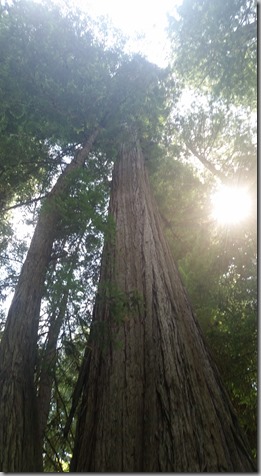 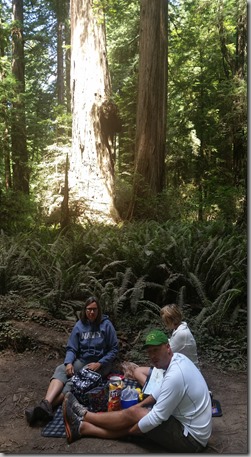 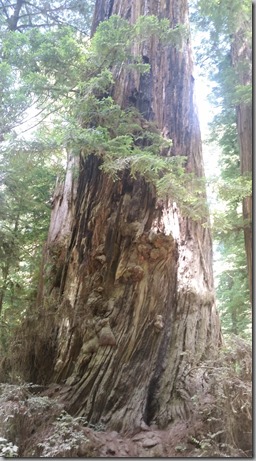 We left the Redwoods and went back into Oregon. We headed northeast up through the Smith River Valley. It was curvy and beautiful. We then went through Grants Pass and joined the Rogue river for a while. Then we turned north to Crater Lake National Park. None of us had ever been there. When we arrived at the rim, 3 of us were blown away at the beauty of the lake. Shannon does not like heights and stayed back away from the rim. 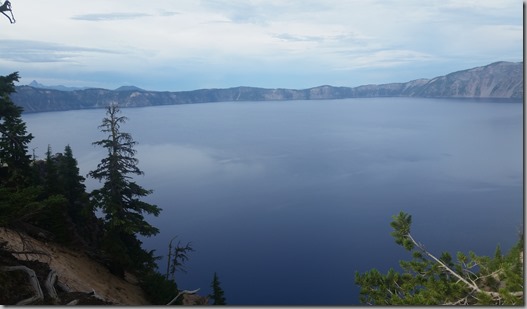 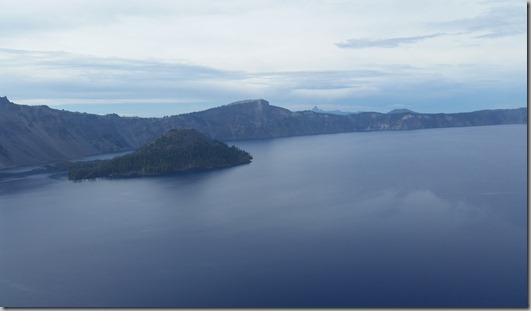 Crater Lake is the deepest lake in North America at almost 2000 feet. The colors are due to the lack of stirred up sediment. 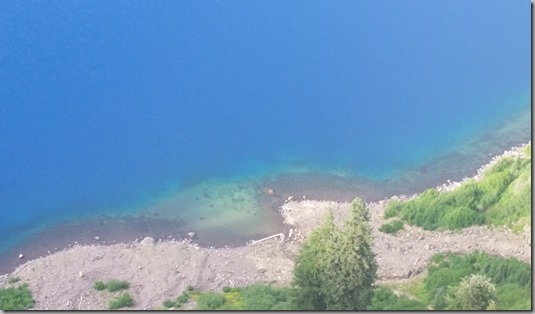 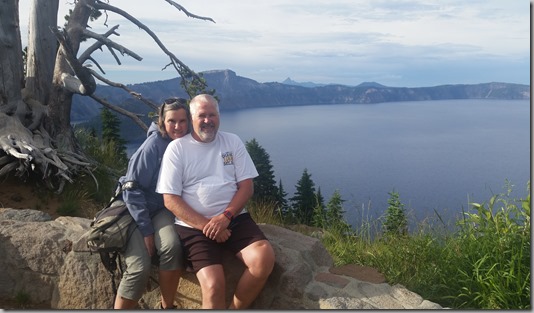 When you consider that this volcano exploded about 1200 years ago with 10 times the power of Mount St. Helens, it is a bit concerning. It could happen again. We moved around the rim of the lake and took a bunch of pictures, but none of them do this place justice. 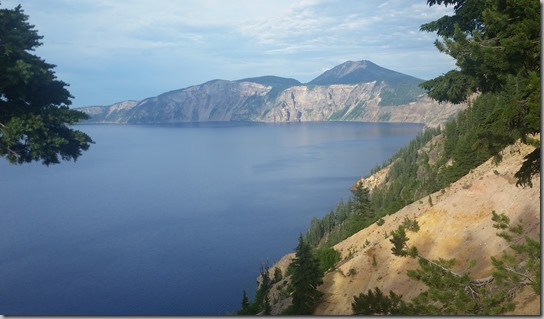 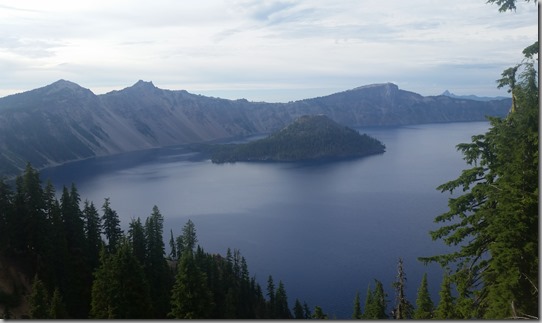 The island is actually the cone of the volcano. It is growing! There is another one in the lake under the water. 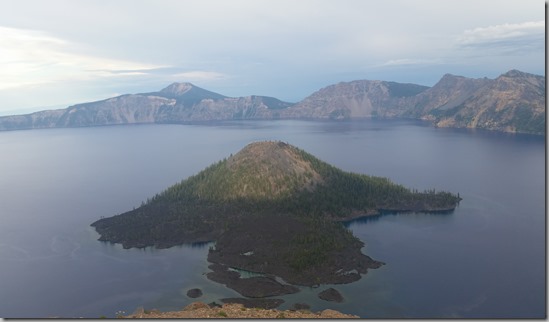 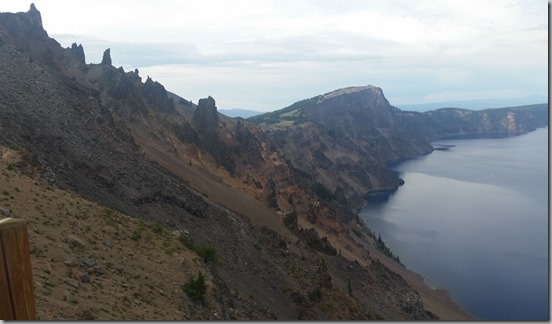 I think this is the best Panoramic shot of the trip. Be sure to click on it and pan across it. This picture best captures this amazing National Park. 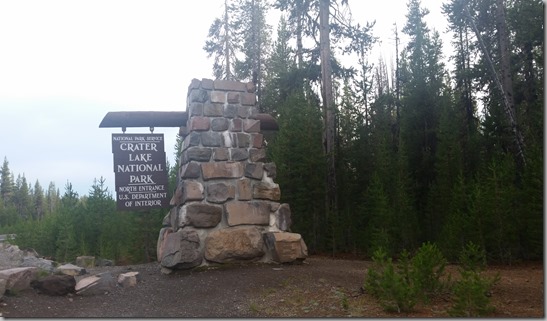 Brian and I considered taking a ranger guided hike up to see the sunset. It was going to be a spectacular sunset, but we were already pushing it on time, so we headed back to our campground. We did get some great shots of the sunset along the way. 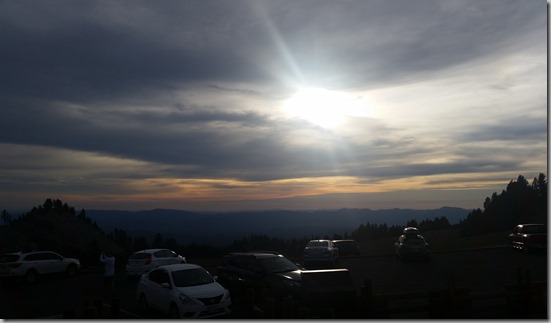 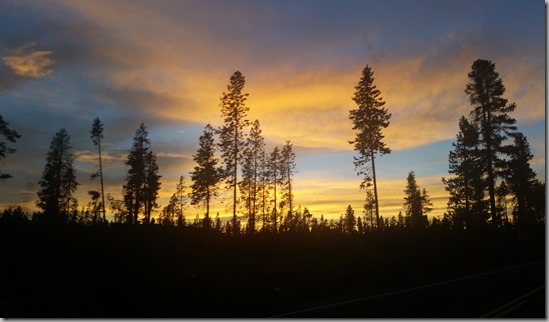 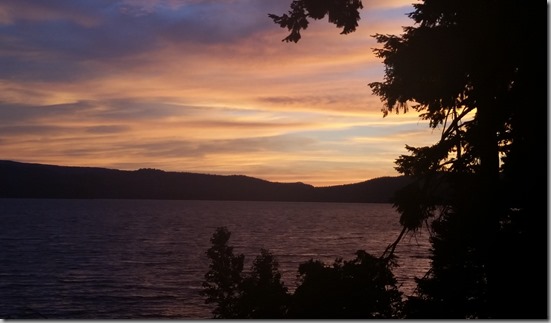 We got back to the campground at a little after midnight. Shannon drove the last section after we stopped and had dinner. This day was Shannon and Brian’s first anniversary, so we splurged on dinner and went to Dairy Queen. OK, it was the only thing open and we had to eat in the car because the drive through was the only way to get food. It worked and we got home that much faster.

It was an awesome day and one that we will not soon forget. I hope it was as memorable for Brian and Shannon. The long day earned us a relaxing day at the beach. We all were really looking forward to that. We did something I have not done in a very long time. Come back to see what that was.

Posted by ktmissouri at 8:26 PM