Cape Perpetua and Kim leaves me

Saturday, July 11 was a very strange day. When we awoke at the crack of 9, we did not have any plans. It was my fathers 84th birthday and I knew I wanted to make time to call Dad, but that was about it. It was cloudy and was drizzling.

We decided to drive north to maybe visit one of the lighthouses up that way. The drive along the section of the Oregon coast just north of us is very beautiful. Right in the middle of that is a place called Cape Perpetua. The name goes back to Captain Cook. He charted the point and then sailed 7 days in heavy seas and when he approached land he was at the same exact point, so he called it the perpetual point, hence the name. 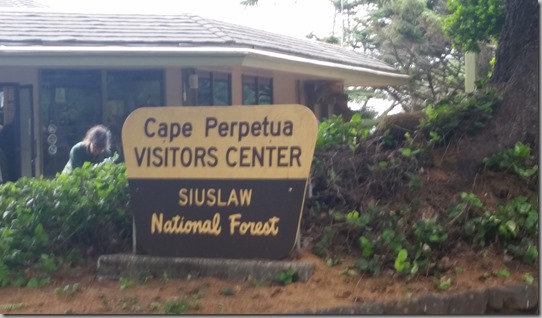 We stopped there to see what it was all about. The views from the first parking area were beautiful, but with the rain, I did not take any pictures. We went to the visitors center and watched a couple of movies about the area. This area is a protected wilderness. It has an old growth forest of Western Hemlock and Sitka Spruce. I love to see old growth forests. I talked to one of the volunteers that lives in his Airstream trailer on site. He is a full time RVer, but chooses to spend his time volunteering at beautiful places around the country. He told us about a steep, but beautiful walk up behind the nature center. Kim was game, so we started up the hill. The trees were very impressive, but some of the large ones have to be removed when they fall. When the tree is cut from the stump and root ball, the stump stands up again. Here is a picture of one of the 1000+ year old stumps: 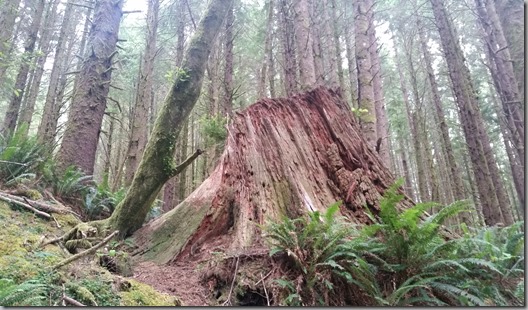 We did see some very large trees that are in the 600+ year range. 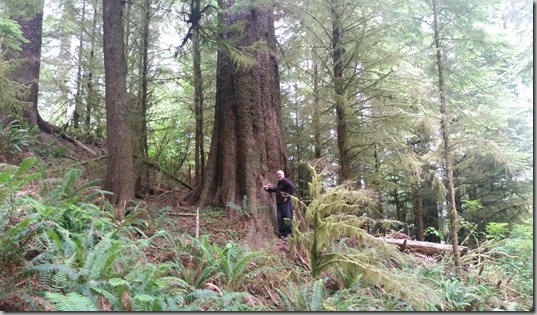 The forest is very dense and beautiful. I really enjoyed the walk. 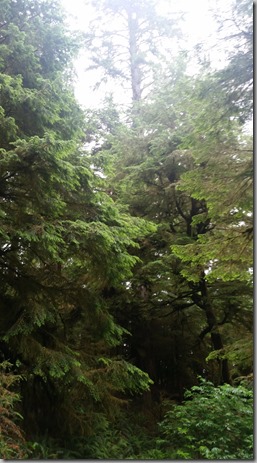 Now for the story behind the title. Many of you that know me, were probably saying it was just a matter of time that Kim would come to here senses and go back home and leave this crazy lifestyle. Thankfully, this was not that day.

The story goes like this. After the walk, we drove to a parking area to look at the rocky cliffs leading down to the ocean. When we returned to the truck, I noticed that we had 3 bars of 4G on my cell phone. I called and talked to Mom and Dad. The signal was fast, so I posted a blog entry and did other internet stuff. Kim decided to call and talk to her best friend since high school, and the maid of honor from our wedding, Cindy, that lives in Alaska. Kim knew that Cindy travels to Portland and Seattle on a regular basis and was hoping to see her if she comes this way during the next couple of months that we are in the PNW. She called right back and told Kim she was in Oregon now! She and her sister that lives in Seattle, were about 120 miles from us and were enjoying a girls weekend celebrating Cindy’s birthday. It was 4 in the afternoon, when Kim looked at me and asked if she could go. I was defenseless, so I told her to take the truck and be careful. I spent the evening and most of the day Sunday alone. It was kind of nice for a while, but I soon missed Kim and now know that doing this lifestyle alone would be… well, lonely. We have so much fun together and who else would laugh at my corny jokes. She had a great time seeing Cindy and Belinda her sister, who she had not seen in 30 years. There were a total of 5 girls there and Kim knew all but one of them.

Kim returned safely on Sunday afternoon with all of the left over food from the week they had all spent together. We won’t have to shop for another week. It will be fun making meals out of the stuff. A big part of the food is cheese from the Tillamook cheese factory. They had made a visit and must have caused them to increase production for the week.

The weekend did not turn out like we planned. Actually we did not have a plan, but it still turned out very well. Kim had fun and I now have more of an appreciation for our life together. Here is to hoping in never ends.

Tell the person you love how much you appreciate them.