Villanueva State Park and a Tour of NE New Mexico

We had lunch in the church parking lot before we left Roswell, NM on March 22. Which is my brother Bob’s Birthday. Happy Birthday, Bob!

We were looking at 170 miles up to Villanueva SP. The web site for this park is really lacking in information. I made a phone call and no one answered. So, we just decided to go for it and hope that things would work out. It was Sunday night and most Spring breaks should be over, so we were hoping for some openings.

As we headed north I could tell the drive would be quite different from the day before. We had a gusty wind out of the NW and the land was even more barren than we had seen. We drove up 285. At times there was not a tree in site. We did see a number of small herds of antelope. I love antelope.

We drove north through Vaughn and then turned on Hwy 3. We drove on Hwy 3 for 88 miles. We saw three vehicles the entire time and two of them were motorcycles. There was not a single house or business that was occupied. The terrain turned to rolling hills and juniper trees. The thoughts of what would happen if we broke down does creep into your head, but that is all part of the adventure. We did cross over I 40 after about 50 miles and saw a few cars there, but then it was back into the wilds of central NM until we got to Villanueva. We dropped down into a canyon along the Pecos river. I was not too impressed with the SP when we first arrived, but it is starting to grow on me. Here are a few shots of the park and river. 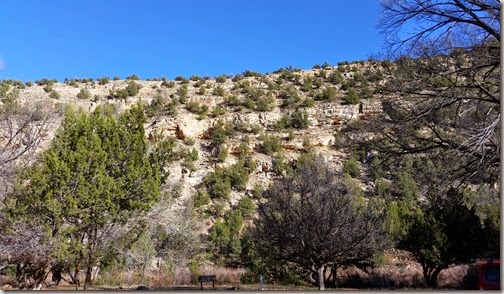 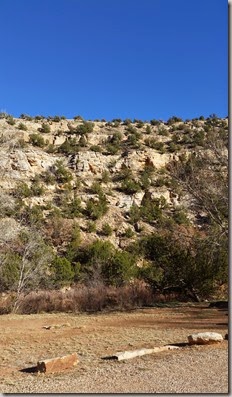 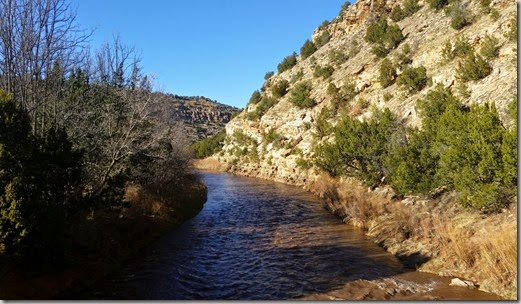 Here is our site: 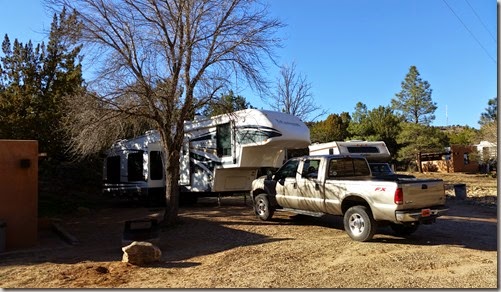 We had some neighbors, but that turned out to be cool. We met some neat people.  One thing to note about this park is that we have no Cell signal, so no internet and no OTA TV. We are listening to the one radio station that we can receive. It is old country.

We were thinking about going skiing up in the Santa Fe area. We decided to take a driving tour of NE New Mexico. We heard from our daughter that Taos was her favorite place in NM. So we got up on Monday morning and headed to Las Vegas, NM and then up into the mountains to Taos. The views were beautiful. 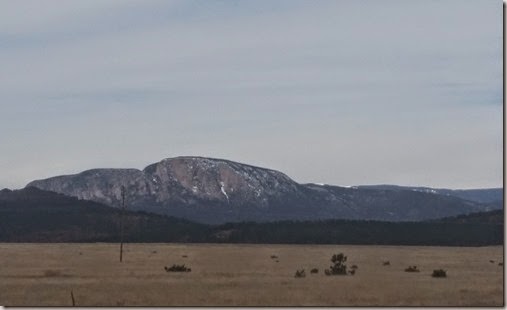 We did see some snow on the high mountains, but the temps were in the 50’s, so we knew the snow would be melting fast. We did stop and check out this small family ski area called Sipapu: The snow had the texture of mashed potatoes and was melting fast. Check out the rushing creek in this shot: 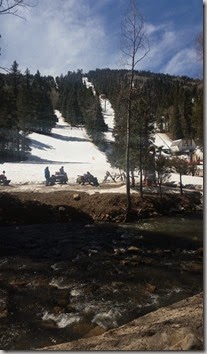 We decided that skiing was not a good idea this late in the season. We just continued on to Taos. The views just kept getting better. 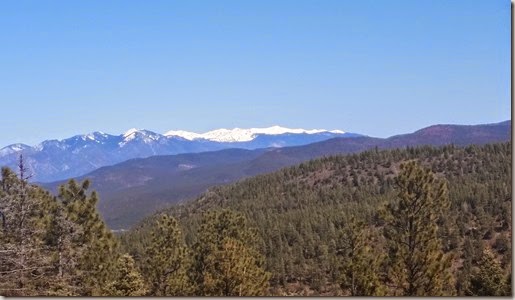 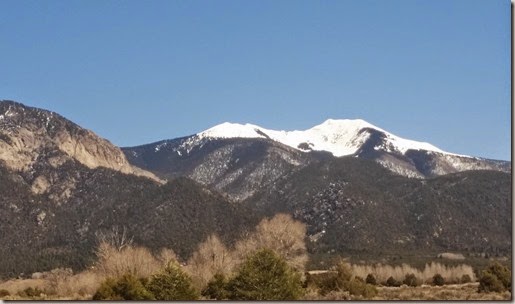 We continued on to the town of Taos. To be honest, we were not that impressed. The town is surrounded by mountains, but it is very arid and there are almost no trees. We headed up to the Taos ski area. It was over 50 degrees at 9000 feet. Not good for the snow. 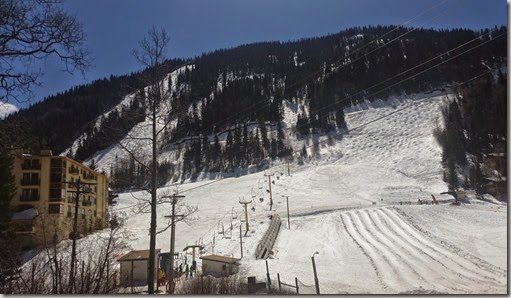 We then headed back south on the road to Santa Fe. We came to a spot where the highway crossed the Rio Grande River. It was one of those, “ Hey that looks deep, Really deep, really really deep! Wow, Shawn, Stop, we have to check this out.” 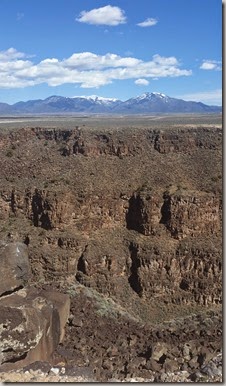 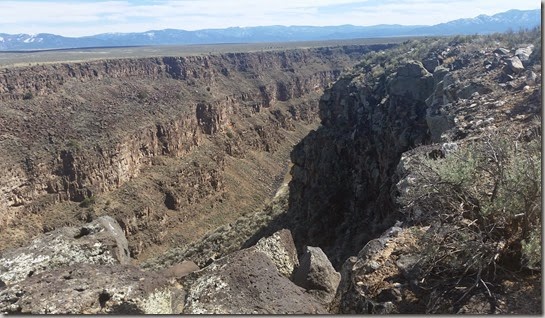 We bypassed the roadside area that was full of vendors selling their trinkets. We went into the adjacent rest area and took a short walk out to the edge. That is where I got all of the pictures above. I pulled up the map and found that there was a road that ran along the edge of the gorge for a while and then dropped down in. Then it crossed over and ran along the river all the way to Espanola. It looked like this might be part of the Rio Grande Del Norte National Monument. Kim was a bit skeptical, but we turned off on the road. It was paved for a while, but then we hit dirt and then a spot that had all of the warning signs. Steep, 4X4 only, etc. Yeah, Yeah  whatever. Kim’s skepticism turned to “I don’t think this is a good idea.” My response was, “What do you think?” She said, the classic “Your decision…” My response, “Cool, let’s go!”

For once in my life, she later admitted that I was right. The dirt only lasted a short while and the truck had no issue with the road. The fact is any car could do it easily. The views were very cool and the ride down the canyon had new vistas at each turn. The water was high due to the run-off and it looked like very good easy white water. We were thinking more about the boat. 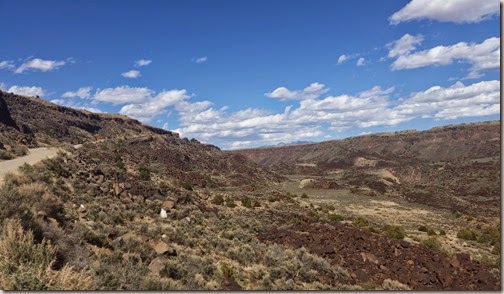 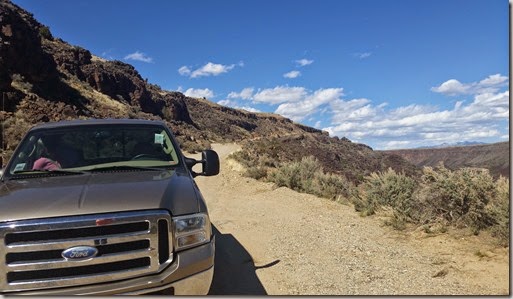 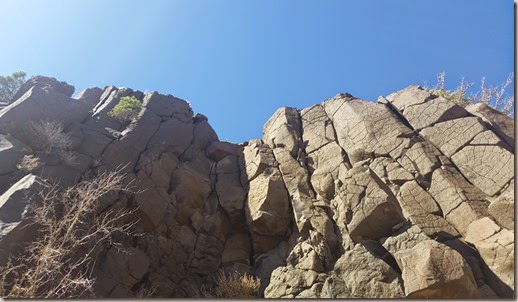 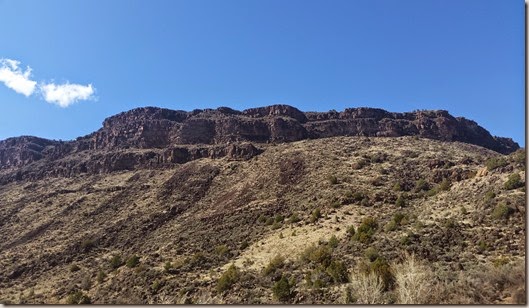 As we got closer to Espanola, the white water got more serious. We saw a couple of 3 feet tall standing waves. There were a number of outfitters and it looked like on a weekend it would be the place to be. There are also some nice campgrounds along the river. A few of them could handle big rigs.

We then drove on to Santa Fe. We had no idea where we were going, but headed downtown. If you have been following this blog for a while, or just know me, you know I don’t like cities. Santa Fe was no different. We found a mexican restaurant that was right next to an REI store. Kim wanted some new hiking boots. We got some Merrells for her and then got a bite to eat. We then made the 60 mile drive back to the campground. We had to make it back because they lock the gate at 7PM. No way to get in, no combination lock. We have never seen that before, but we made it and all was good. Long day, but we can cross off a couple of other places off of the to do list and found, to us anyway, a hidden gem.

Posted by ktmissouri at 8:25 AM