Touring the East Side of Glacier National Park

On Sunday, June 14, I decided to take another day off to let my back rest and see if I could get ready for a long drive on Monday. There are two main entrances to Glacier NP. One through West Glacier that we have been near and the other end of the Sun road at St. Mary. There are other entrances into the park at Many Glacier and Two Medicine on the East side and a couple other entrance on the west that are very low volume entrances because you have to drive a dirt road to get to them.

On June 15, we decided to drive to the East side and see as much as we could see. Because the Sun road is closed, we had to drive all the way south around the park. It is only about a 60 mile drive, so that is really not that bad and probably not longer in time if the Sun road was open. We agreed that it would be better if Kim drove as much as possible today. I had a good time just riding along looking for wildlife.

We followed the Middle Fork of the Flathead river for most of the drive. The railroad follows the same path. Building roads and railroad beds in this country is difficult. They have long shelters for the trains to sit in when bad weather strikes. 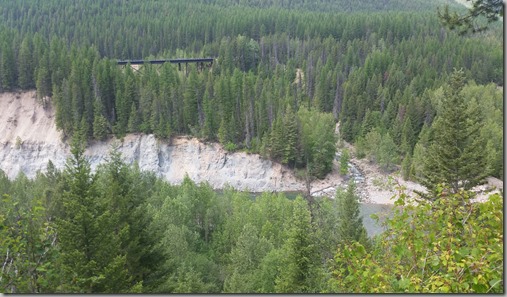 We came to East Glacier and then headed into Two Medicine. This side of the park does not have many visitors until the Sun road opens. I really enjoyed the light crowds. Before we could even enter the park, we saw a Sow Grizzly and two cubs. I got some close up shots of mama, but the cubs ran off. 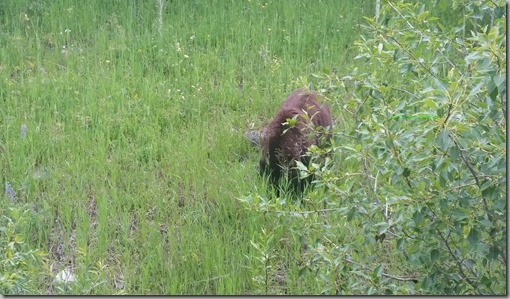 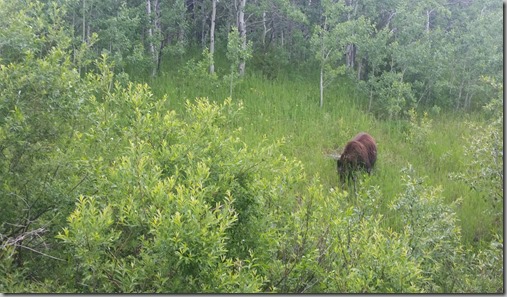 Cool way to start the day. We then drove on to a waterfall called Running Eagle Falls. It is a double waterfall. It is very cool. I have never seen one like this. 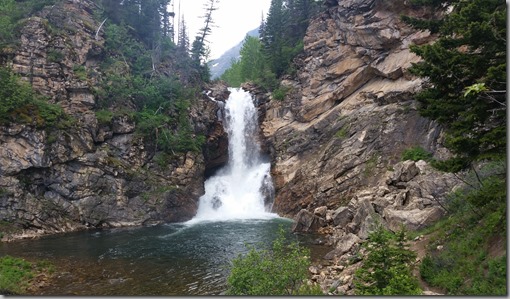 There is a lower fall that has its own water source and they both join together at the bottom. 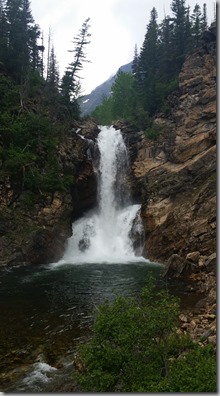 We came to to Two Medicine lake. The views were off the chart. The low cloud cover made for some interesting shots. 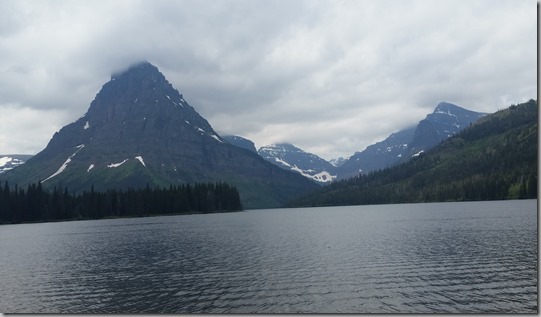 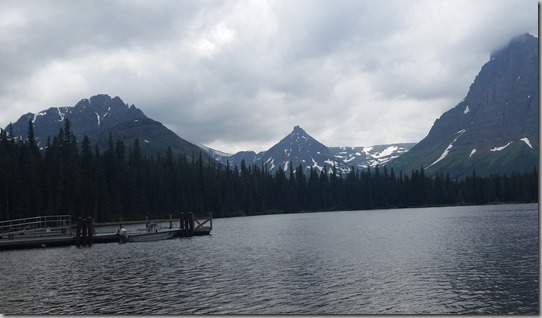 We decided to stop for lunch. Pretty nice view from there. 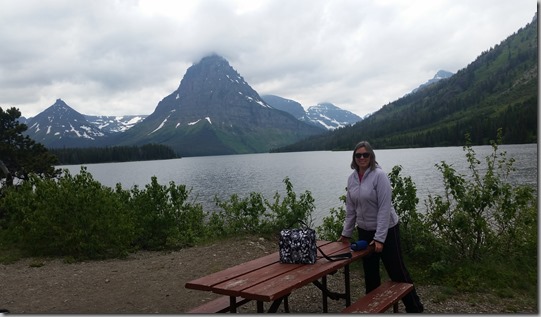 We were sitting there for a while when a young couple stopped and decided to have their lunch right next to us. We started talking and we found out that they are from Boston and are on a year long sabbatical from work. They have traveled all over the world. They were a blast to talk to. I love it when young people seize the opportunity and travel. This is Jim and Chirstiana. 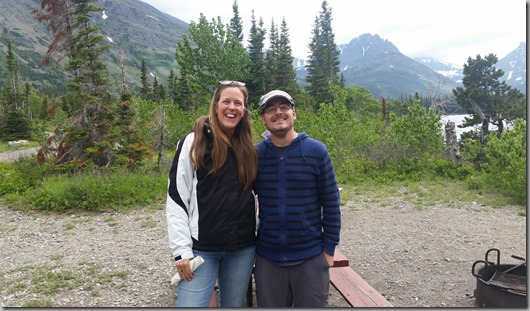 It is so much fun to talk to other travelers. You guys ROCK!

We then headed over to St. Mary. We had to drive over a very twisty road that was about as rough as any paved road I have ever driven. It was crazy!

When we arrived at St. Mary, the road was of course closed, so we just went to the Visitor Center and watch a couple of films. The one on building the Sun road was worth the time.

We had heard a lot about Many Glacier. It is a totally different entrance into the park. The Scenery is nice, but the sun had come out and was washing out all of the best views. This is the best I could do. 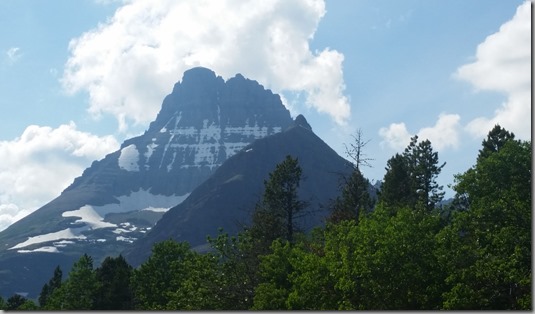 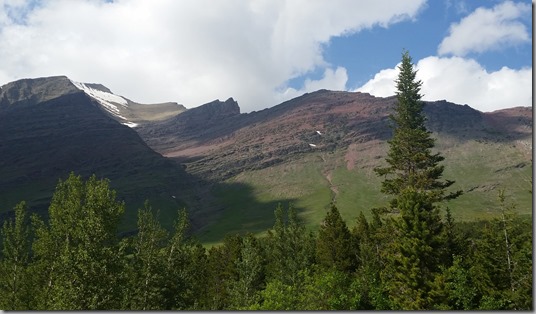 We went for a short hike to a lake. There were some nice views from there. 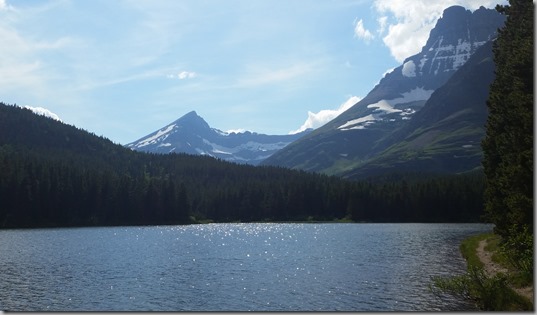 While we were hiking this deer was just hanging around. His antlers are still in velvet. 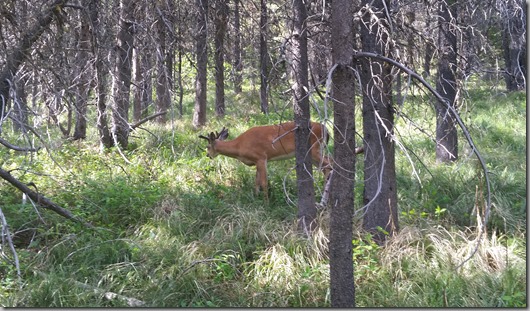 The Many Glacier area is pretty commercial with multiple lodges and stores, etc. The lodges are fairly old and have some charm. 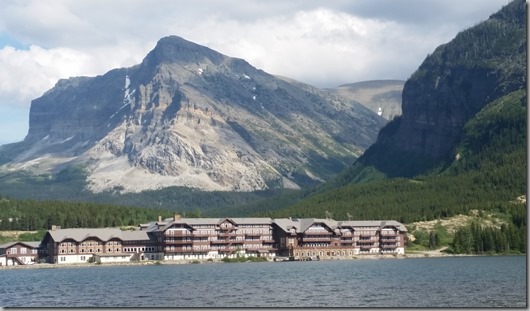 My favorite shot of the day: 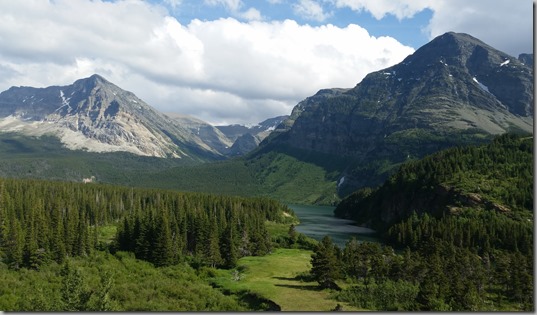 It was getting late in the day and we had a long way to drive back. We liked the East side, but much prefer the west side. We really like the North West Side because it is the least visited area and is the most quiet. I will write about that area in my next entry.

I was driving on the return trip and saw a bear cross the road in front of us. That is the fastest I have seen a bear move and he was fast. The bear is at the top of the embankment. 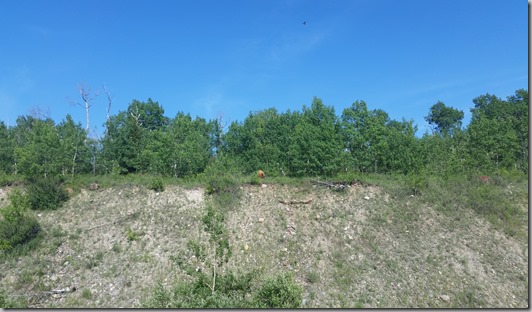 We saw lots of wildlife on this day. We stopped for dinner in East Glacier. I had BBQ ribs. I must say they were excellent. Kim had a Buffalo burger. She thought it was very good also. The name of the place is The Whistle Stop Restaurant. We finished with a slice of Huckleberry pie ala mode. That was the best dinner we have had in a long time (mainly because I did not have to cook it.)

It was a very good day of exploring. I will leave you with a cool shot of some Bear Grass: 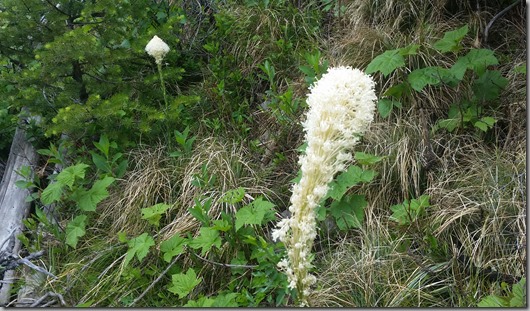 I think it is a really cool flower. I really liked this day because I like to meet new people and these people were very impressive. Meet someone new today and take the time to get to know them.