On June 2, we decided to go see the Grand Canyon of Yellowstone and its famous waterfalls. We headed out back up Blacktail Plateau to Roosevelt and then turned south over Dunraven pass. The drive is just beautiful.
We had just left Mammoth and we saw a baby Elk with its mother. Kim loves babies, so we stopped and looked for a while. Then I noticed something else. There was a wolf or coyote that was checking out the baby also. I got some pictures of the K9, but they are not very good. 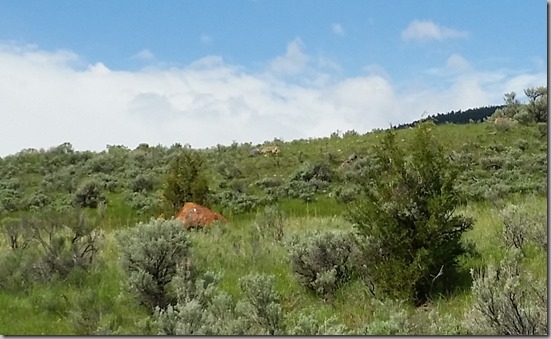 It is top center in this shot. I had to blow it up, so it is a bit grainy. We left to let nature take its course.
Then we saw our third bear. This was a black bear. 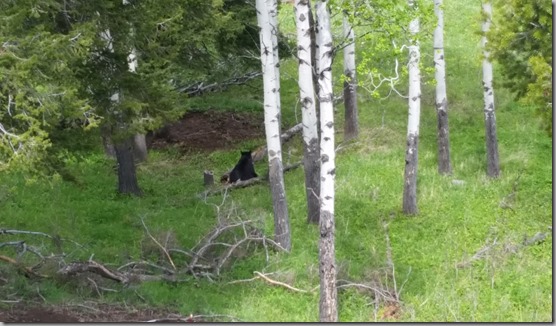 It is very cool to see these animals in a natural setting. I like this much better than zoos.
We stopped at an interpretive nature walk. We had the place all to ourselves except two bison. I have to admit, I really would rather spend time alone admiring nature with Kim than seeing really spectacular things with a million other people. 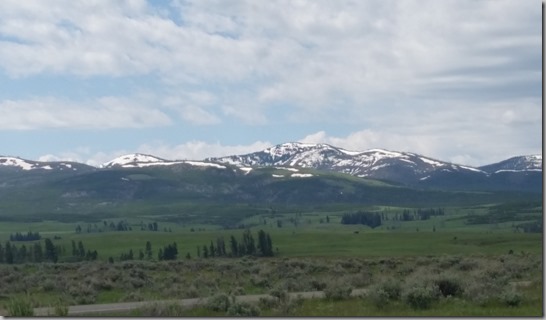 We stopped and checked out Tower Falls. That was the first of a many waterfalls we saw this day. 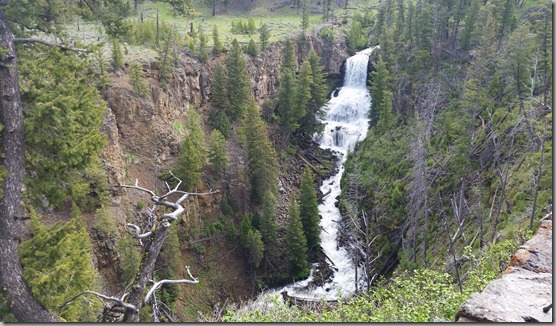 That was very cool, I really enjoyed the canyon and rock formations. 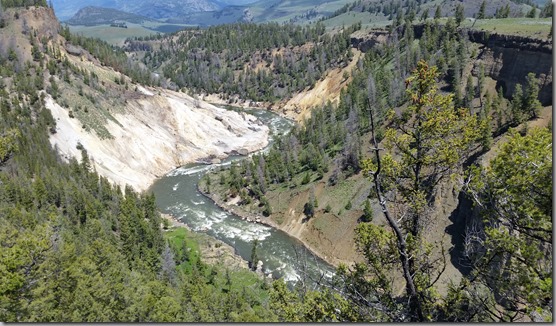 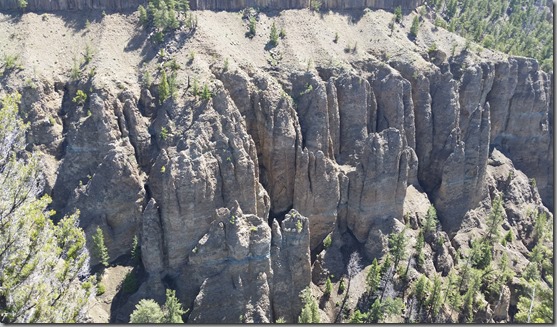 The climb up Dunraven pass was serious. I would never take my trailer on that road. The views were amazing. 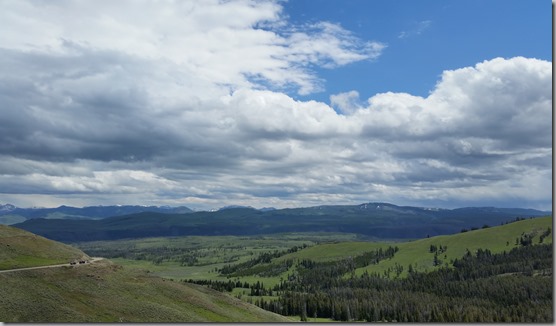 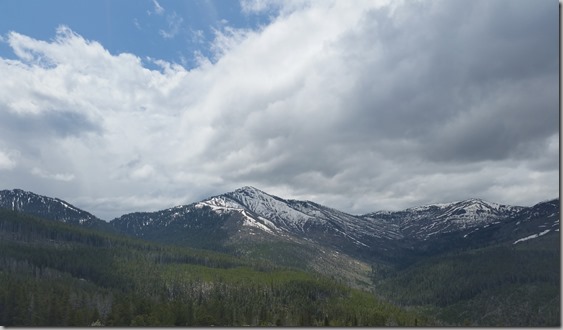 We went and checked out the Visitor Education Center in Canyon Village. We enjoyed two films and went through the exhibits. It is all very well done. Then we headed over to the Grand Canyon of Yellowstone. This is the classic shot of the waterfall: 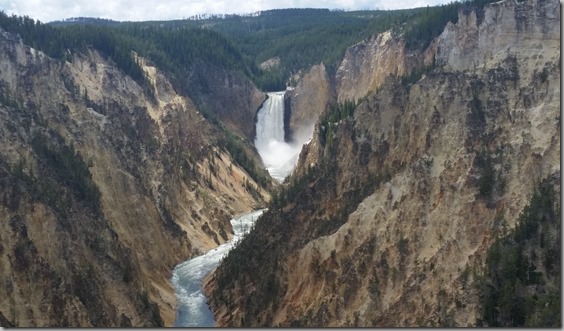 There was a waiting line of tour bus people to get in position to take this shot. Oh well, it is still spectacular.
We went to a number of observation points. This is a video from the brink of the falls:
I really think it shows the power of the falls and you can see the rainbow!

Here is a picture also: 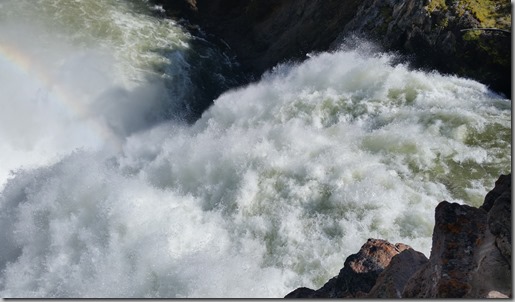 We then went to another view point. It was good, but they also had a steep walkway to the waters edge. I decided I needed the workout, so I went for it. Kim stayed behind for this one. 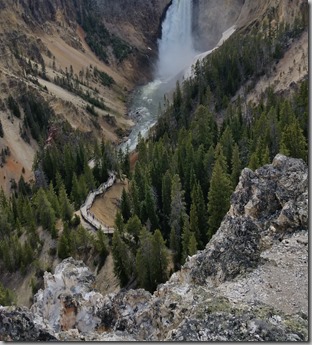 You can see the walkway in this picture. Way down there. This is what it looked like on the trail: 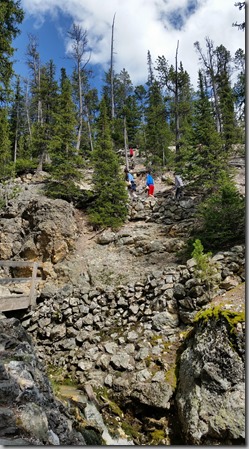 This is what you get for your effort: 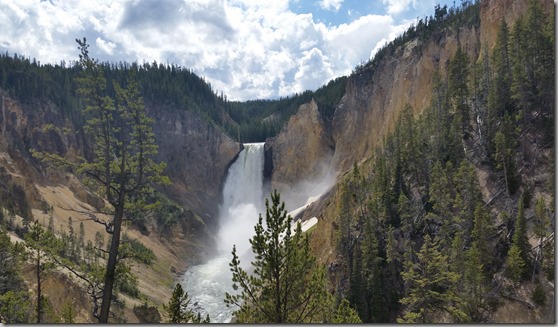 The views along the canyon are very interesting. There are many different colors and rock formations. You also have steam vents and other activity that you would find in Yellowstone. 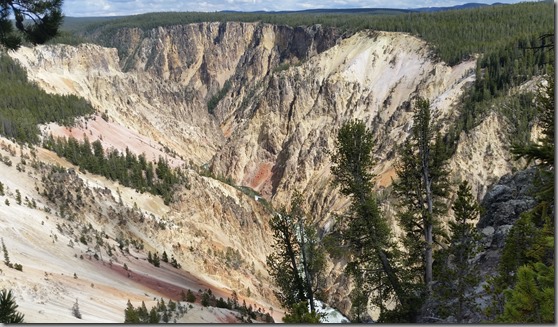 We even got someone to take a picture of us: 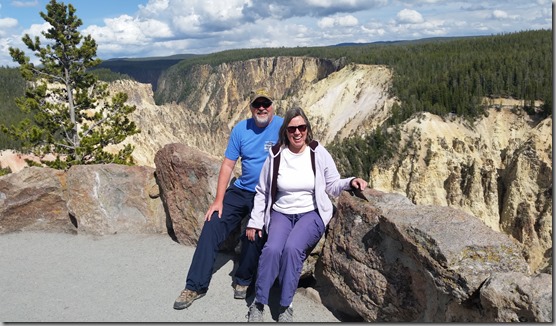 We then headed back to camp. We stopped off at another waterfall. From there we could look down the valley and see another rainbow. It was just that kind of day. 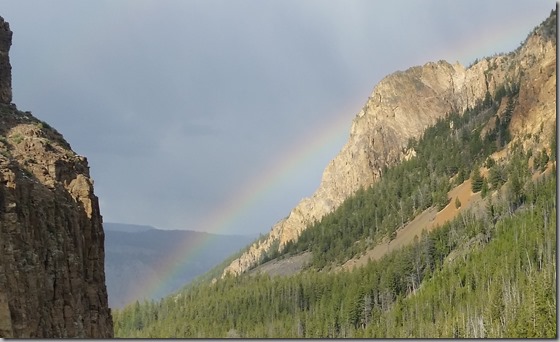 Just another day visiting the most amazing place I know. I did a bit of scouting and tomorrow will include some fishing. I did not say catching…
Have you noticed that we have not shown a picture of a geyser or a mud pot? That is because we did not see one until day 5. The picture of the rainbow above is so much better.
Posted by ktmissouri at 10:15 PM