On June 23, we left Kettle Falls and moved 60 miles down Lake Roosevelt (Columbia River) to Fort Spokane. It was a beautiful drive. There was a mix of pine forests and some farm land on the highlands. Here are a few shots along the way. 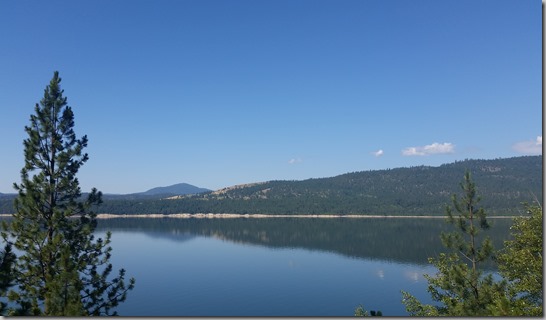 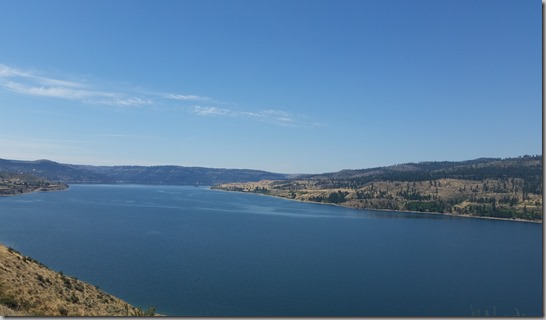 When we arrived at Fort Spokane, we found a very nice campground at the confluence of the Spokane river and the Columbia. It did not take 5 minutes to meet our neighbors. Bill and Darrell are both in their 80’s and live in the Spokane area. Sadly both of their wives have passed away. They do some traveling together while still maintaining their houses in Spokane. They have been friends for many years. We really enjoyed their company during our stay. 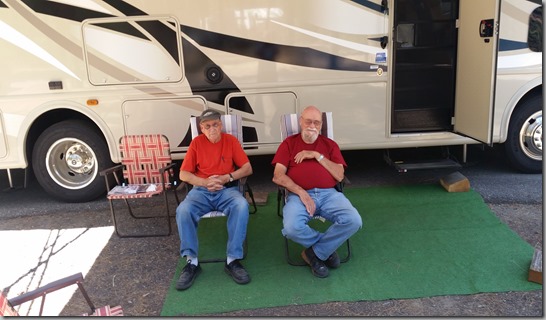 There is a nice marina here and a swim beach. I went swimming to cool off after the drive. As we are moving down the river, we are losing elevation and it is getting hotter. It got up in the 90’s each day we were there and we did not have electric, so no air conditioner. The huge Ponderosa pines did give us some much needed shade.

This is a shot of the swim beach and the Spokane River. In the distance is the mighty Columbia river slowed by Grand Coulee Dam. 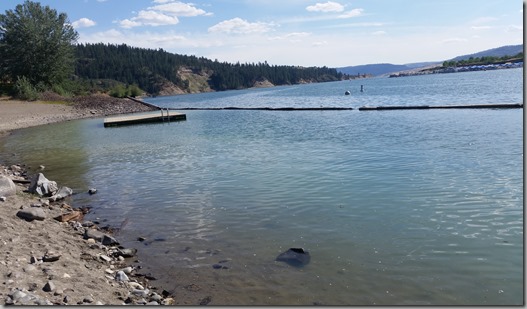 This is a shot of the boat ramp area, check out the interesting rock formations on the far shore. 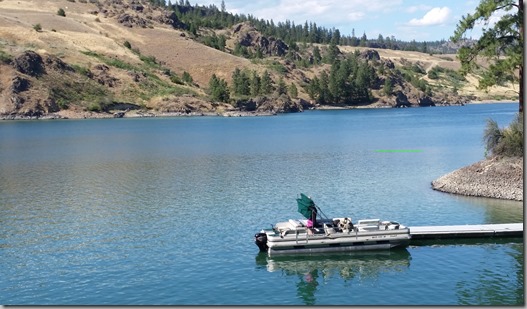 Our site at Fort Spokane is huge. It could easily hold two rigs as big as ours. It was the nicest site in the campground and may be one of the largest sites we have ever had. 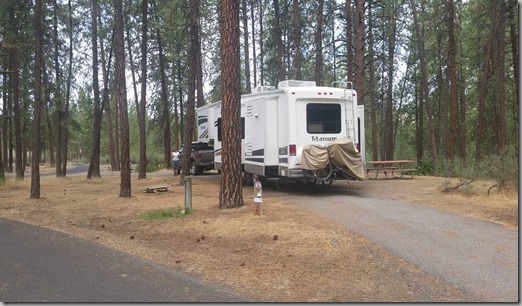 Kim and I took a walk to the now restored Fort Spokane. The National Park Service has done a nice job of restoring the fort and telling the story of what happened here. 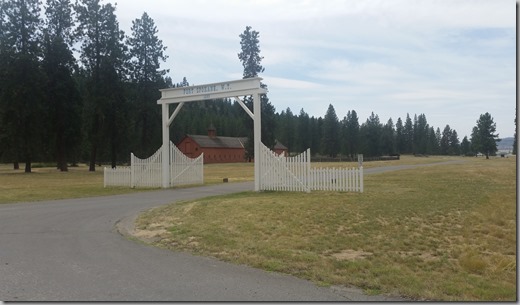 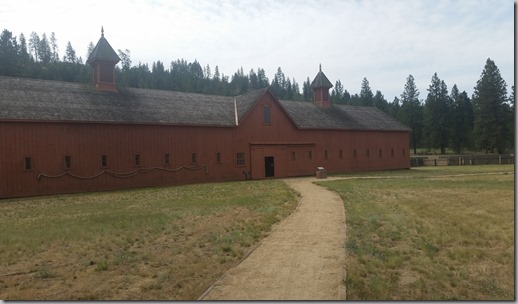 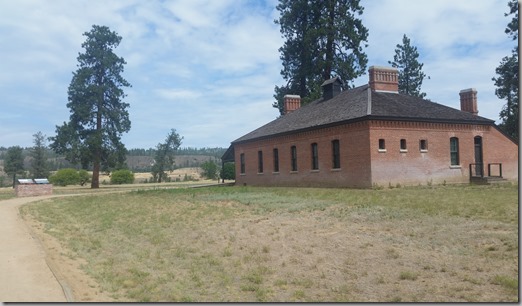 The story of the fort is interesting and very sad. The fort was established in 1880. It was the last fort established on the frontier. The mission of the men stationed here, was to keep the peace between white settlers and the Native Americans that had been moved to the Colville Reservation across the river. They saw no action other than stopping the white settlers from encroaching on the Indian Reservation. When the Spanish-American war broke out, the men were reassigned to Cuba and fought with Teddy Roosevelt at the battle of San Juan Hill. The fort was reassigned to the Bureau of Indian Affairs around 1900. In what I feel is one of the saddest events in American History, they opened an Indian boarding school on this site. The children from the local reservation were moved here against their will and they tied to force them to learn the white mans ways. If they tried to escape, they were locked in solitary confinement in the old jail at the fort. Some of the children that were locked up were under 10 years old. The children were only allowed to go home 3 weeks each year. This happened in this country less than 100 years ago. I was appalled.

We were about 80 miles from the Grand Coulee Dam and decided to drive the truck down and take a tour. There is also a laser light show that we have been told is worth seeing. The only problem is that it starts at 10 PM. On June 24, we decided to head down to check it out.

Since I was a small boy, I had heard of The Grand Coulee Dam. At the time, it was the largest Dam in the world. It was built for three reasons: Flood control, Generate Electric Power and provide water to irrigate crops. The negative effect was the elimination of prime river land used by the people up river and the destruction of the Salmon run further up the Columbia river. 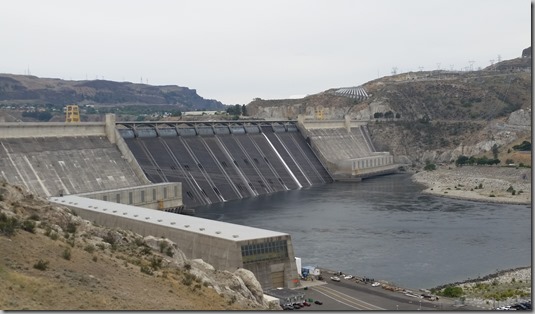 This area of Washington is very dry. They get less than 9 inches of precipitation per year. The irrigation is the only way that this has become such a major producer of grain, fruits and vegetables. The very rich soil was brought in to this area from Montana by the massive floods that I mentioned in my previous post.

The dam was built in three phases starting in the 1930’s. It was finished with phase three in 1964. The penstocks on the hillside above the dam in the picture above carry water to Banks Reservoir that was created to provide the irrigation water.

We took the tour. The security is very tight. Another post 9/11 dam issue. We did get to see the large turbines in generator house #1. 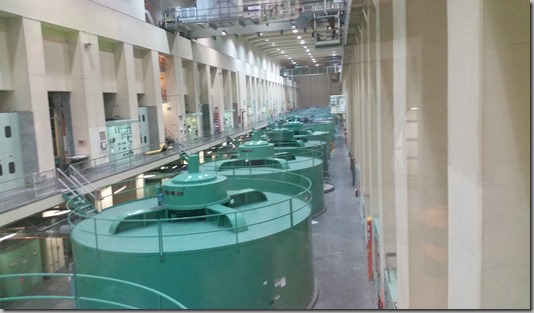 These are less than half the size of the ones in the third generating plant on the other side of the dam. They told us that much of the power that was generated by the dam was used by the Hanford project during WWII, that is just south of here. My father worked at the Hanford project in the 50’s and 60’s. I can’t wait to ask him about that statement.

Looking down the 550 feet to the base of the dam. 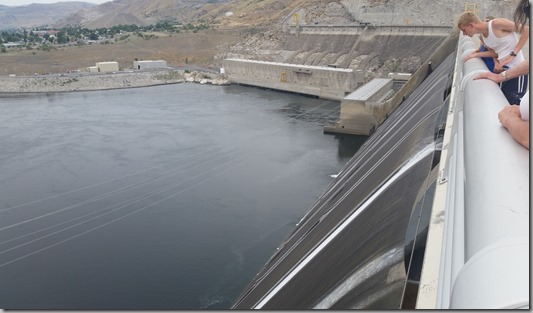 We had dinner and then went to the visitor center. The best part was the movies they were showing. We watched three movies including one on the construction of the dam. There was also and hour long movie called “Sculpted by Floods”. It was the best explanation of what has happened in the Columbia river valley that I have seen during this trip.

I also picked up a booklet called “ Brief Historical Introduction To the Confederated Tribes of the Colville Reservation. It gave a brief history of the 12 tribes that were moved onto the reservation that was established in 1872. I found it very interesting and sad. The population in the tribes had been reduced by about 2/3 in the previous century by disease brought to them by the White man.

We stayed for the laser light show. Normally they have the rotating doors open and the face of the dam is white, but they are having trouble with the doors, so the face of the dam was brown and the lasers did not show up as well. We drove back to camp and got there by around 11:30 PM. It was a long day, but very educational.

I did get a picture of a Bald Eagle right after the tour. 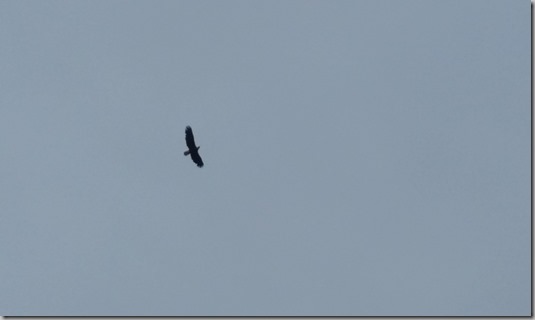 We really enjoyed our time at Fort Spokane. We ended up staying three nights. We are making our usual slow progress on our way to the Portland area to meet our Daughter and Son in Law for the forth of July weekend. We are really looking forward to that. The only problem is that the forecast is for some very hot weather moving into the Pacific North West. It is time to find some electricity, so that we can run the air conditioner. We are exceeding our sunny and 75 goal. We are not sure what our next stop will be. Come back to see where we end up.